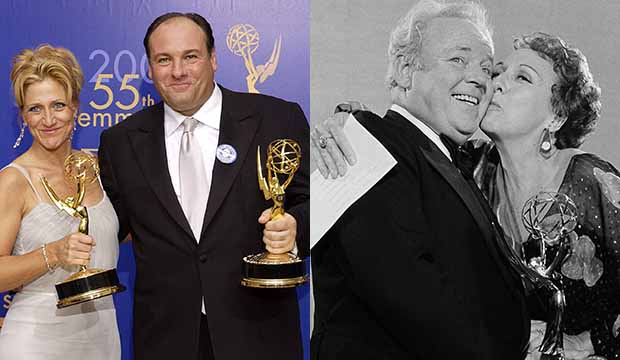 It’s only happened 14 times that fictional TV husbands and wives have won Emmy Awards in the same year. Tour our photo gallery above to see who they were over the past 70 years. Our research is for drama and comedy series only (not TV movies or limited series).

And there are four possibilities that could join them at the 2019 ceremony: Jason Bateman and Laura Linney (“Ozark”), Milo Ventimiglia and Mandy Moore (“This Is Us”), Eugene Levy and Catherine O’Hara (“Schitt’s Creek”), and Tony Shalhoub and Marin Hinkle (“The Marvelous Mrs. Maisel”).

Here is a full list of the 14 couples who have achieved this before:

1978
Carroll O’Connor and Jean Stapleton (“All in the Family”)

1972
Carroll O’Connor and Jean Stapleton (“All in the Family”)