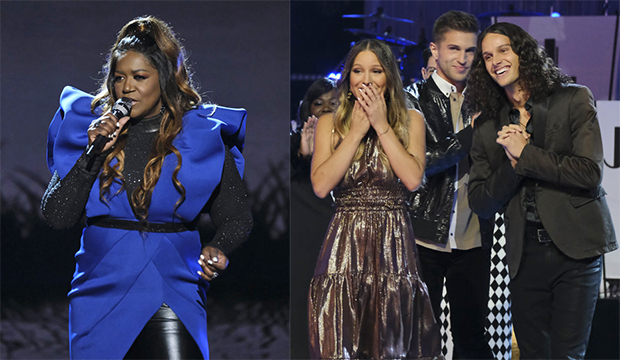 Ever since Gold Derby’s predictions center for “The Voice” opened at the start of the Season 21 live shows, Wendy Moten (age 57) of Team Blake Shelton and Girl Named Tom (ages 20–26) of Team Kelly Clarkson have switched off being in first place. However, with just hours left to go in the competition, the sibling trio from Pettisville, Ohio is now far out front and will likely become the first group to ever win NBC’s reality TV show.

Below are the updated winner predictions for “The Voice” Season 21, as of finale week. Do you agree or disagree with these racetrack odds, which are derived from the predictions of your fellow users? There’s still time to make your picks before 6:00 p.m. PT on Tuesday, December 14.

Girl Named Tom opened up the 21st season of “The Voice” by being the first blind audition shown to TV audiences. They earned four button-pushes for their take on “Helplessly Hoping” and chose to join Team Kelly. They won their battle of “Seven Bridges Road” against Kinsey Rose and then succeeded in their knockout of “Wichita Lineman” against Holly Forbes (who was quickly saved by Ariana Grande). The trio’s live show performances included “Creep” (Top 21), “Dust in the Wind” (Top 13), “More Hearts Than Mine” (Top 11), “Viva la Vida” (Top 10), “River” (Top 8) and “The Chain” and “Baby Now That I’ve Found You” (Top 5).

Wendy, who is currently recovering from a broken arm, was a four-chair turn in the blind auditions with her version of “We Can Work It Out.” Blake savvily used his block on John Legend, which is part of the reason Wendy chose the country superstar as her coach. In the battles, her cover of “If I Ever Lose My Faith in You” impressed Blake over Manny Keith. Next up was the knockouts, where she ousted Jonathan Mouton following her rendition of “Ain’t No Way.” In the live shows, she advanced thanks to “I Will Always Love You” (Top 21), “Blue Bayou” (Top 13), “Freeway of Love” (Top 11), “Jolene” (Top 10), “You’re All I Need to Get By” (Top 8) and “How Will I Know” and “Over the Rainbow” (Top 5).