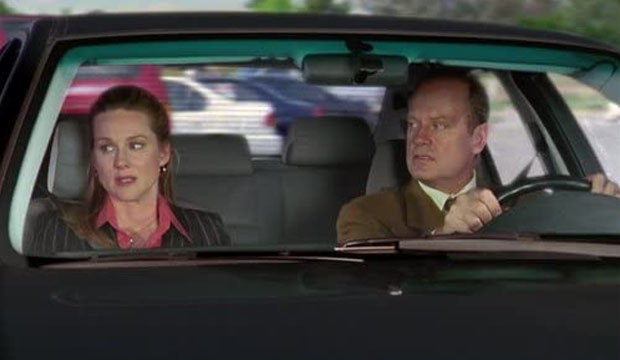 Over the course of its 11-year run, NBC’s “Frasier” amassed a total of 37 Primetime Emmys from 107 nominations. In 2004, it received six awards for its final season, including acting trophies for leading man Kelsey Grammer, supporting player David Hyde Pierce, and guest performer Laura Linney. Linney, who appeared in five of the series’ final six episodes, was honored for playing Charlotte Novak, the last of the title character’s many love interests.

At 40, Linney triumphed over the previous year’s Best Comedy Guest Actress champion, 32-year-old Christina Applegate (“Friends”). The rest of her competitors ranged in age from 56 to 78. Today, she stands as the category’s 10th youngest winner after initially entering the ranking at sixth place.

Since 1975, a total of 30 actresses have won Emmys for their roles as guest performers on continuing comedy programs, beginning with Cloris Leachman, who bagged two awards in the same year for turns on “Cher” and “The Mary Tyler Moore Show.” Including Leachman, eight of the winners have triumphed more than once. The honor has been bestowed on an annual basis since 1993 and was occasionally awarded before then.

Check out our photo gallery to find out who ranks ahead of Linney on the list of 10 youngest Best Comedy Guest Actress Emmy winners. This list also factors in winners of the now-retired variety performance awards, since guests on continuing variety series now compete here.