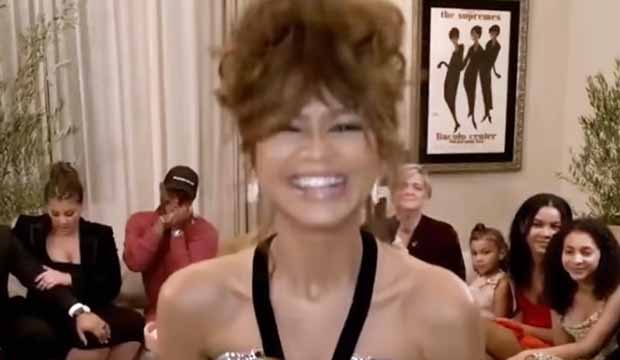 Last September, Zendaya made history when she won the Emmy for Best Drama Actress for her work on the first season of HBO’s “Euphoria.” She followed in the footsteps of ground-breaker Viola Davis (“How to Get Away with Murder”) to becoome the second Black actress to ever win the award. And, at 24, she was the youngest winner in the category’s history. As noteworthy and well-received as her win was, it came as quite a surprise to most awards prognosticators.

By our odds, hers was the most unexpected acting victory of the night. She ranked fourth in our predictions, ahead of Jodie Comer, the previous year’s winner, and Sandra Oh, who were both up for their performances on “Killing Eve.” She was running significantly behind predicted champ Laura Linney (“Ozark”), Jennifer Aniston (“The Morning Show”), and Olivia Colman (“The Crown”), but managed to overcome those odds and prevail over them all. Now, she has moved on to an even tougher challenge.

The buzz surrounding her performance in the Netflix film “Malcolm & Marie” has earned her the fifth spot in our Best Actress Oscar race with 8/1 odds. Currently, she is ranked behind Viola Davis (“Ma Rainey’s Black Bottom”), Frances McDormand (“Nomadland”), Carey Mulligan (“Promising Young Woman”), and Vanessa Kirby (“Pieces of a Woman”). If she can clear the nomination hurdle in March and then pull off the win in April, she will be added to the very short list of performers who have triumphed at the Oscars less than a year after doing the same at the Emmys.

She’d be the fifth person to accomplish the feat, following four other women. Several men have tried but were ultimately unsuccessful at the Oscars, the most recent being Benedict Cumberbatch. He scored an Emmy for “Sherlock: His Last Vow” in August 2014 but lost in his Oscar bid for “The Imitation Game” six months later.

The four ladies who Zendaya has the opportunity of joining are:

Hunter was also nominated for the Best Supporting Actress Oscar that same year for “The Firm.” She had previously won in the same Emmy category for “Roe vs. Wade” in 1989, and went on to garner five more nominations.

Hunt also won in the same Emmy category for the same series in 1996, 1998, and 1999. She and co-star Paul Reiser took on producing responsibilities during the final three seasons and both had their names attached to an Outstanding Comedy Series nomination in 1997.

This was Mirren’s third of four Emmy wins from 11 nominations in the same category. Like Helen Hunt, she took home another Emmy (her second for “Prime Suspect”) less than a year after she won her Oscar.

King won an Emmy in the same category for “Watchmen” just last year. She was one of a record nine Black acting winners in 2020, including fellow actresses Uzo Aduba (“Mrs. America”), Jasmine Cephas Jones (“#FreeRayshawn”), Maya Rudolph (“Saturday Night Live”), and Zendaya herself.