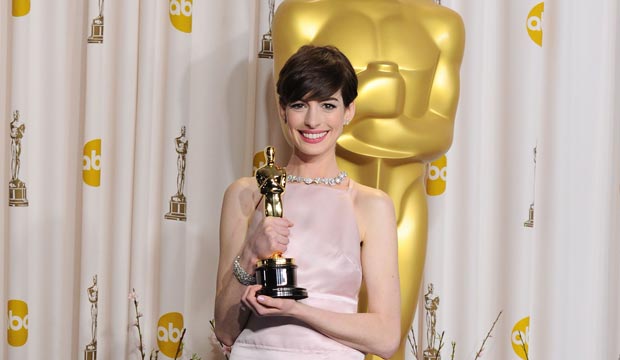 Stardom came quickly for Anne Hathaway when she first began her career. After one season on an unsuccessful sitcom, Hathaway found herself cast as the star of Garry Marshall’s film “The Princess Diaries.” It was kind of a case of art imitating life since in the film a young high school girl finds out she is really a princess and is launched into the public eye.

The same thing pretty much happened to Hathaway. The acting bug was in her system since after all she was named after the wife of William Shakespeare and her mother was a former actress who gave up her career to raise a family. In one great coincidence, her mom’s last role before motherhood was in a national touring company of “Les Misérables.” In that production she was an understudy for the role of Fantine, the doomed factory worker turned prostitute who sings the shows big song “I Dreamed a Dream.” Coincidentally many years later Hathaway would be cast in that role for the film version of the musical and go on to win an Academy Award for it as Best Supporting Actress.

Hathaway has had a remarkably diverse career for someone her age. She has pretty much worked in all genres from comedy to serious drama to musicals to science fiction with even a stop along the way as Catwoman in a Batman movie. Let’s take a look at her career in a photo gallery offering her 15 greatest film performances, ranked from worst to best. Our list includes the movies mentioned above, plus her Oscar-nominated turn in “Rachel Getting Married,” “The Devil Wears Prada” and “Brokeback Mountain.”