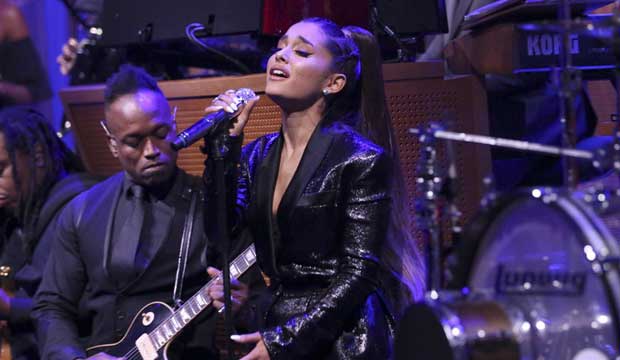 What are the greatest hits of Ariana Grande‘s career? The powerhouse vocalist has made a name for herself and then some, so we’ve ranked the best songs she has recorded. Did your favorite make the cut? And do you agree with our choice for her best song ever?

Grande got her start on Broadway when she was just 15 in the musical “13,” which featured a cast made up entirely of teenagers. But her big breakout role came a couple of years later when she played Cat Valentine in the Nickelodeon series “Victorious” in the early 2010s and then its spinoff “Sam and Cat.”

She followed in the footsteps of artists like Justin Timberlake, Britney Spears, Selena Gomez and Demi Lovato, who parlayed their success on kids’ TV shows into a multi-platinum music career. And the milestones kept coming.

She released her debut studio album “Yours Truly” in 2013. It debuted at number-one on the Billboard 200 albums chart and featured the song “The Way” featuring Mac Miller, which was her first ever top-10 hit on the Billboard Hot 100 singles chart.

Her second album, “My Everything,” earned her her first Grammy nominations: Best Pop Album and Best Pop Duo/Group Performance (“Bang Bang” with Jessie J and Nicki Minaj). But the first time she took home a Grammy was in 2019, when her fourth album, “Sweetener,” won Best Pop Album.

Just a few months after the release of “Sweetener,” she outdid herself again with her fifth album, “Thank U, Next,” which produced the first number-one singles of her career: the title track and “7 Rings,” which topped the Billboard chart back to back. “Thank U, Next” also earned a Grammy nomination for Album of the Year, her first ever in that category.

And she accomplished all that by the time she was 26. See how we rank her best songs below.