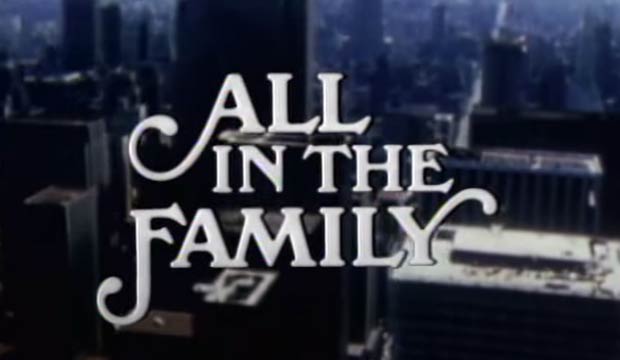 One of television’s most groundbreaking series hit the airwaves 50 years ago this month, and the small screen hasn’t been the same since. Emmy-winning “All in the Family” is one of the first programs to address sensitive topics previously considered unsuitable for television, one of the first sitcoms to effortlessly blend humor with drama, and one of the most influential programs of all time, impacting not only the industry but pop culture as well.

On January 12, 1971, Norman Lear‘s version of the British sitcom “Till Death Do Us Part” debuted on American television. Week after week, patriarch Archie Bunker (Carroll O’Connor), his wife Edith (Jean Stapleton), daughter Gloria (Sally Struthers) and son-in-law Mike Stivic (Rob Reiner) would argue with each other, as well as a variety of family members and neighbors, over pretty much every hot issue of the day – racism, homosexuality, gun rights, rape, women’s liberation, war, abortion, breast cancer, menopause – issues that divide our country to this day. The writers and performers brilliantly portrayed both sides of the coin: both the conservative and liberal viewpoints, as well as the generational gap that affected these opinions.

Not only did the show tackle hot topic issues, they did so with a variety of characters that had never been fully represented on television. Archie’s prejudice against pretty much anyone who doesn’t look or act like him, and his clashes with Mike’s open-minded and liberal views, are the heart of the show. African-Americans, Hispanics, Catholics, people from Irish and Italian descent – they all are the bunt of Archie’s rage and misguided beliefs at some point. But Archie’s rages never come from hate – they come from lack of understanding and knowledge. But the younger generation isn’t portrayed as always right either – both sides are presented fairly, offering a touch of humor as well as understanding in heated, and even at times tragic, moments.

Throughout its nine-year run, the popularity of “All in the Family” led to five direct spin-offs, and two indirect spin-offs, including “Maude,” “Good Times” and “The Jeffersons.” Not only was it a commercial success, but the series soon became a favorite on Emmy night, and is the first of four sitcoms in which all the regular cast members won Emmy awards. O’Connor and Stapleton were each nominated almost every year the series ran, with O’Connor winning four and Stapleton winning three. Struthers and Reiner each won two. The series was nominated for Best Comedy Series each year of its run, winning four. All in all, the series won 22 Emmys out of 55 nominations.

Archie’s misuse of the English language and butchering of metaphors are legendary, and he enriched our vocabulary with words like “meathead” and “stifle.” Edith could meander her way through a story like nobody else, and her patience and ditziness are the perfect buffer to Archie’s blustering. And Mike and Gloria’s hippie ways fueling Archie’s flames show that the generational gaps are nothing new, and are just as relevant today as they were 50 years ago.

It can be argued that every sitcom since has in some way been influenced by this one, and there will never be another quite like it. Yes, “those were the days,” and today we celebrate 25 of the best episodes from this legendary sitcom with our ranked 50th anniversary photo gallery.

Comedy legend Carl Reiner dead at 98; watch our funny video chat from 2 years ago with the TV and film…

Moving on up: ABC's 'Live in Front of a Studio Audience' wins Emmy for Best Variety Special…

Redemption day for 'One Day at a Time'! Netflix sitcom saved by Pop TV, current home of 'Schitt's Creek'…

Huge Emmy surprises next for ABC's live 'All in the Family/ Jeffersons'?

Did you think Marisa Tomei's Edith Bunker was comedic genius? Pick her now on our prediction site

Emmys for 'All in the Family' and 'The Jeffersons' live event? It could follow in 'Jesus's'…