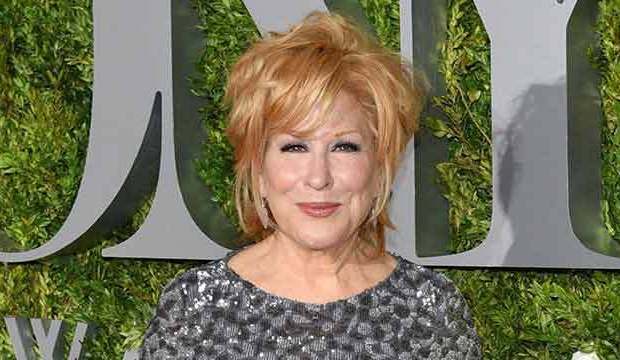 Bette Midler has enjoyed one of the most varied and successful careers in show business encompassing success on stage, screen and in the recording industry. She shows no signs of slowing down either since having a starring role in recent years for the Broadway revival of the musical “Hello Dolly!” That performance earned her a Tony Award as Best Actress in Musical. She has also won three Emmys, three Grammys and three Golden Globes over the course of her career. One of the Emmys came for her much loved classic television moment when she sang on the second to last episode of Johnny Carson’s tenure as host of “The Tonight Show.”

Midler was born in Honolulu, Hawaii but left during her sophomore year of college to pursue a career in New York on the stage. She was soon cast as one of the daughters in the long-running production of “Fiddler on the Roof” and stayed with the show for three years. Midler has said she felt she had made it at this point in her life and didn’t really even dream of having more of a career. That all changed when she started performing a nightclub act in a gay bathhouse that became a sensation in New York and lead her to a concert and recording career. Her first album was released soon after and earned her a Best New Artist Grammy Award in 1973.

Midler began receiving film offers at this time but her manager and boyfriend, Aaron Russo, felt she should hold out and make her film debut in a role geared towards her talents. She turned down a number of supporting roles in films, including Sylvester Stallone’s wife Adrian in “Rocky.” Midler eventually found the perfect debut film role as the title character of “The Rose,” which earned her an Oscar nomination as Best Actress.

Her film career has been a bit of a rocky one marked by huge successes and then periods without much film success at all. She has made a few mistakes along the way, most notably turning down the lead role in “Misery” that won Kathy Bates an Oscar. But she has always been able to return to her concert act when movie roles were not forthcoming.

To celebrate the Divine Miss M’s birthday, tour our photo gallery above featuring her 15 greatest film performances, ranked worst to best. Our list includes “The Rose,” “Ruthless People,” “Beaches,” “Hocus Pocus,” “For the Boys” and more. Which one do you think is in our #1 slot?