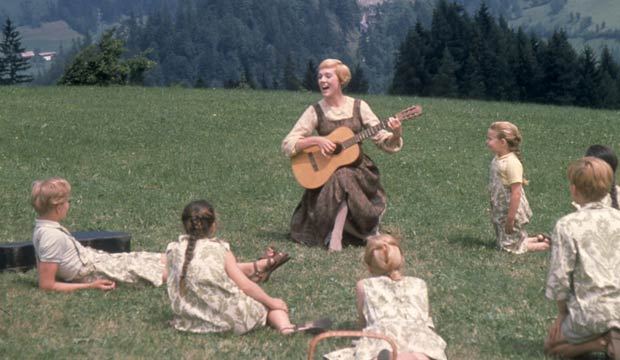 There are two kinds of people in this world: those who hate musicals and those who love them. The naysayers argue that musicals are unrealistic, as people don’t randomly “break into song.” But those who do love a good musical may actually be inclined to spontaneously sing a familiar tune, or have their own moments of “musical stardom” in front of a mirror, hairbrush in hand, belting out “Don’t Rain on My Parade” or “All That Jazz” or “Singin’ in the Rain.” Love ’em or hate ’em, musicals have a rich history in Hollywood, dating back to the earliest days of sound, with a musical winning the second Best Picture Oscar ever given out.

Although it’s rather dated now, “The Broadway Melody” was also the first talking picture to win the top award at the Oscars, and was Hollywood’s first all-talking musical. Sound was a challenge for these early films, as it was pretty much a trial-and-error process finding the best recording quality, which was parodied in “Singin’ in the Rain” 20 years later. Once the technical issues were smoothed out, musicals became an escape for a Depression-weary country, with the extravagance of Busby Berkeley productions like “42nd Street” and romantic comedies like Fred Astaire and Ginger Rogers‘s “Top Hat” becoming hugely popular. Quality sound, spectacular Technicolor and imaginative special effects added to the fantasy and escapism of this genre.

During the WWII years, musicals remained a welcome distraction, with productions like “Yankee Doodle Dandy” bursting with patriotism. MGM rose to prominence in this genre, with people flocking to see stars like Judy Garland in “Meet Me in St. Louis.” Musicals became even grander in the 1950s and 1960s, with many stage productions receiving lavish big screen adaptations, and going on to win top honors at the Academy Awards. Between 1951 and 1968, six musicals won Best Picture, including “An American in Paris” and “West Side Story,” and two now legendary actresses won Best Actress for their screen debuts – Julie Andrews for “Mary Poppins” in 1964 and Barbra Streisand for “Funny Girl” in 1968. However, after “Oliver!” won in 1968, the popularity of musicals began to decline, and with few exceptions such as “Cabaret” and “Grease,” there were very few quality live action musicals made over the next 30 years. Then, as the century turned over, musicals had a resurgence that continues today.

Beginning in 2001, musicals such as “Moulin Rouge!” and “Chicago” proved that audiences were ready to be dazzled by these lavish productions again, with these movies earning big at the box office and gaining critical acclaim. In 2003, “Chicago” became the first musical in 34 years to win Best Picture, a feat which has not be repeated since – although “La La Land” came really, really close in 2017. However, the success of these and other musicals such as “Sweeney Todd” and “Dreamgirls,” and the buzz for “In the Heights” and Steven Spielberg‘s new version of “West Side Story,” hopefully means that musicals are here to stay.

We’ve ranked some of the best live-action musicals that have delighted audiences over the past ninety years. For the sake of this article, we didn’t included animated films, such as the highly acclaimed “Beauty and the Beast” (1991) and all the other Disney classics. We also do not include films with lots of music (like “Saturday Night Fever” and “Footloose”) where the performers don’t break into song. Tour our photo gallery featuring our rankings of the best 30 movie musicals ever, featuring other top stars such as Gene Kelly, John Travolta, Nicole Kidman, Emma Stone, Tim Curry, Prince, the Muppets, Gene Wilder, Elvis Presley and more.