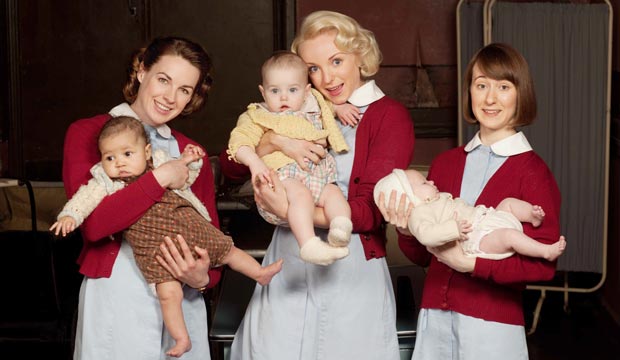 In honor of “Labor” Day, we thought we’d have a little fun and reminisce about the most memorable births on some of our favorite programs. With so many to choose from, it’s hard to believe that in the early days of the medium it was considered “unseemly” to talk about pregnancy, and the general thought was that such a storyline would not go over well with American audiences. Boy, were they wrong!

Lucille Ball was pregnant with her first child in the very early production days of “I Love Lucy,” but producers felt that it would be inappropriate to show a pregnant woman on television. However, she was determined to make her second pregnancy Lucy Ricardo’s first, and the still-hilarious portrayal of Lucy’s struggles with pregnancy, apprehensions about being a mom and frenzied rush to the hospital reeled in such a huge viewership that writers and producers had to concede that Ball was right.

Flash forward half a century, and the bulk of a popular British series is about women giving birth. And, ironically, “Call the Midwife” is set during the time in which “Lucy” was filmed, and the midwives often object to husbands being in the room while the wife is giving birth, which is shown in pretty graphic detail. The drama also delves into all circumstances that could have surrounded a pregnancy in the poorest section of London in the years following World War II, from happy events in a loving home, to racial conflicts, to high-risk pregnancies. I have personally shed many tears, some of joy and some of sorrow, throughout these episodes.

Although we do include some tear-wrenching births on our list, there are also the ones that have made us laugh throughout the years. While dramas use pregnancies to, well, cause drama or to move a storyline forward, sitcoms often use blessed events simply for the laughs. In many cases, a pregnancy is added to a storyline because the actress is expecting, and it’s just easier to make her character pregnant instead of covering it up. A couple on our list had very creative ways of incorporating an actress’s real-life pregnancy on the show. There are also two cases in which the real life mom had her baby on the same day that her character gives birth.

Normally, we only allow one character per TV show on our rankings. However, there is one series in which there are four memorable births, and we have included two, as the actresses were recognized for their work. For variety, we have highlighted all kinds of births – funny, harrowing, supernatural, multiples, duplicitous. Enjoy this memory-filled ranking of over 65 years worth of the 30 best TV births in our photo gallery. Our list includes “Friends,” “Mad About You,” “Murphy Brown,” “The Office,” “Parks and Recreation” and many more.