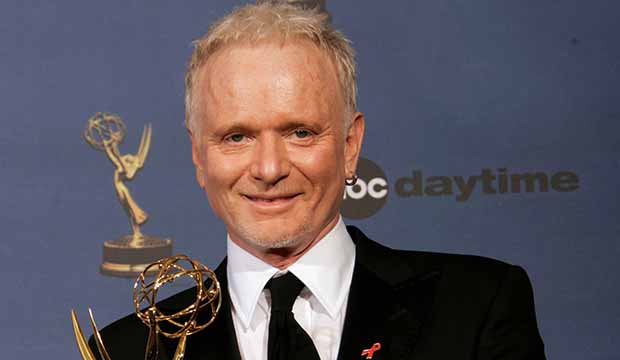 In May of 1974, the first Daytime Emmy Award for Best Actor went to Macdonald Carey for his role as Dr. Tom Horton on NBC’s “Days of Our Lives.” Since that first ceremony, a total of 24 performers have won this award. Scroll through our gallery below to see every recipient who has ever taken home the honor, including a few who made history with their multiple victories over the years.

ABC’s “General Hospital” has earned 12 wins in this category, more than any other soap opera. Eight of those 12 wins went to Anthony Geary, whose victories for the iconic role of Luke Spencer make him the most awarded actor in daytime history and tie him with Julia Louis-Dreyfus for the second most acting Emmys at the daytime or primetime awards. Cloris Leachman is the all-time record-holder with nine wins: one in daytime, eight in primetime. But Geary alone holds the record for most Emmy wins for a single character.

Meanwhile, Peter Bergman, who has earned nominations for his roles as Cliff on “All My Children” and Jack Abbott on “The Young and the Restless,” is essentially the Meryl Streep of the Daytime Emmys. Come to think of it, Bergman’s track record at the Emmys is eerily similar to Streep’s at the Oscars — like Streep, he has earned 21 nominations and three wins. Those 21 noms give him the record for the most nominations in this category. All three of his wins came for his role as Jack Abbott.

The most recent winner of the category is Jason Thompson, who earned his first Emmy in 2020 for his role as Billy Abbott on “The Young and the Restless.” That was his first Emmy win after five previous nominations. At the Daytime Emmys, sometimes good things come to those who wait. Look back at each and every winner and who they were up against when they prevailed.