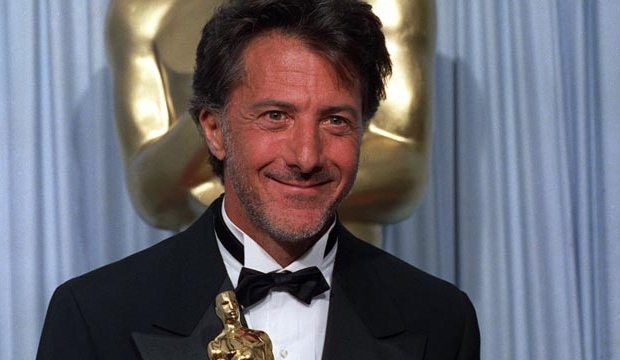 Happy birthday to the great Dustin Hoffman! The two-time Academy Award-winner rose to fame in Mike Nichols‘ 1967 film “The Graduate” but began his acting career years before. In fact, he has been a professional actor for nearly six decades and remains one of the world’s most esteemed performers. He has also received acclaim for working in other entertainment capacities, directing the 2012 film “Quartet” starring Maggie Smith, as well as helming the 1974 Broadway play “All Over Town.”

For his film work, Hoffman has been nominated six times by the Academy, winning twice (for 1979’s “Kramer vs. Kramer” and 1988’s “Rain Man”). He has also earned 11 Golden Globe nominations, winning for “Kramer vs. Kramer,” 1982’s “Tootsie,” “Rain Man” and as Most Promising Newcomer for “The Graduate.” In addition, he has been nominated twice for a Screen Actors Guild Award. For his stage work, he earned a Tony nomination for the 1990 production of “The Merchant of Venice,” and for television, he earned another Globe for the 1986 telecast of Arthur Miller‘s “Death of a Salesman.” Also for “Salesman,” Hoffman won an Emmy Award for his lead performance as Willy Loman and earned a second nomination for producing the television movie.

Let’s celebrate Hoffman’s birthday by ranking his 20 greatest film performances from worst to best in the photo gallery above.