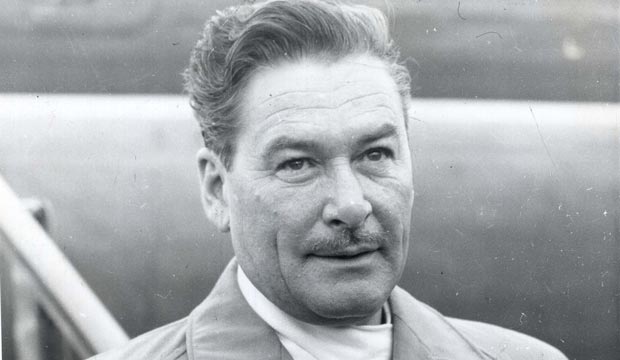 He was one of the biggest screen icons and one of the most colorful real-life characters in Hollywood history. Still considered the king of swashbucklers 60 years after his death, Errol Flynn’s success was a combination of happenstance, luck and his ability to charm.

Errol Leslie Flynn was born on June 20, 1909, in Hobart, Tasmania, Australia to an affluent family. A natural born rascal, he was thrown out of several private schools, and eventually wandered, working odd jobs. He fell into acting quite by chance when he won the role of Fletcher Christian in the Australian film “In the Wake of the Bounty” (1933). There are conflicting stories of how he landed this part, but it is the film that piqued his interest in acting, and eventually caught the attention of Warner Bros. executives.

In Hollywood, a combination of luck and Flynn’s athleticism and charm landed him the lead role in a film that would shoot him to stardom. “Captain Blood” (1935) was originally a vehicle for Robert Donat, but he turned it down, as did several of the other big names at the studio. After screen testing several contract players, Flynn won the role. The film was a hit, making Flynn a huge star, and establishing very successful film partnerships with costar Olivia de Havilland and director Michael Curtiz.

Flynn followed “Blood” with one hit after another, taking over the title of king of swashbucklers from Douglas Fairbanks. He was consistently one of Warner Bros. top three stars from 1937-1943, with such hits as “The Adventures of Robin Hood” and “The Sea Hawk”. As the 1930s came to an end, and World War II loomed overseas, he moved to other era-appropriate features, including westerns, war movies, and period dramas. Many of these were just as successful, including “Dodge City,” “Gentleman Jim” and “The Dawn Patrol”. His roles were typically a wise-cracking but good-intentioned rebel whose smile and wit won the hearts of innocent young girls and justice for the underdog.

Unfortunately, off screen, his devil-may-care attitude did not have such positive results. He became as well known for drinking, fighting and womanizing as he was for his roles. He was married three times, had four children, was involved in numerous lawsuits, and had money troubles. In 1943, two young girls accused him of satutory rape. Although he was acquitted, and had a fan base rooting for him, his image as a romantic lead was permanently damaged. It is said that his ability to charm his way out of the legal mess led to the phrase “in like Flynn”.

For much of his adult life, he was plagued by many health problems, including malaria, chronic back pain, heart problems, liver damage and hepatitis. In 1942, he became a U.S. citizen in order to enlist, but was denied due to all these health issues. After 18 years with the studio, his drinking led to his termination at Warner Bros. in 1952. Despite his hard living, he found success in other areas besides acting: he also produced, wrote, and had a short-lived television series, “The Errol Flynn Theatre” (1956-1957). He made a comeback to film in 1957 with “The Sun Also Rises”, playing what would be the first of several aging alcoholic characters. He was an early supporter of Fidel Castro during the Cuban Revolution, writing articles documenting his time in Cuba with Castro, and was the only journalist with Castro on the night he learned he won. In fact, Flynn’s last film, “Cuban Rebel Girls” (1959), chronicled this adventure.

On October 14, 1959, Flynn was visiting Vancouver, British Columbia, with his 17-year-old secretary, who was also allegedly his mistress, when he fell ill. He died of a heart attack at the age of 50. The coroner reported that his many other health conditions, as well as cirrhosis of the liver, contributed to his death, and that he had the body of a 75-year-old man. His no-holds-barred autobiography “My Wicked, Wicked Ways” was published posthumously, and has sold over one million copies. It remains it print today.

Flynn lived hard and without apology. He once said, “It isn’t what they say about you. It’s what they whisper.” Take a photo gallery tour featuring his 20 greatest films, ranked worst to best. Our list includes “The Adventures of Robin Hood,” “Captain Blood,” “The Sea Hawk” and more.