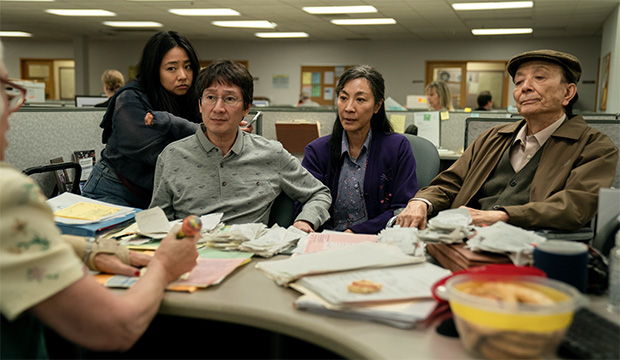 Nominations for the 95th Academy Awards were announced in the wee hours of Tuesday, January 24 by Riz Ahmed and Allison Williams. Heading into the morning, Gold Derby’s 2023 Oscar predictions for nominations had “Everything Everywhere All at Once” reaping multiple bids, which turned out to be true. However, its overall total of 11 citations was bigger than anyone could have expected.

A24’s film is directed and written by the Daniels (aka Daniel Kwan and Daniel Scheinert) and stars Michelle Yeoh as a laundromat owner who traverses alternate universes. Besides Oscar mentions for picture, director, original screenplay and lead actress, the sci-fi epic also nabbed supporting acting noms for Jamie Lee Curtis, Stephanie Hsu and Ke Huy Quan and below-the-line notices for costume design, film editing, score and song. Read on for even more details about all 11 “Everything Everywhere All at Once” Oscar nominations.