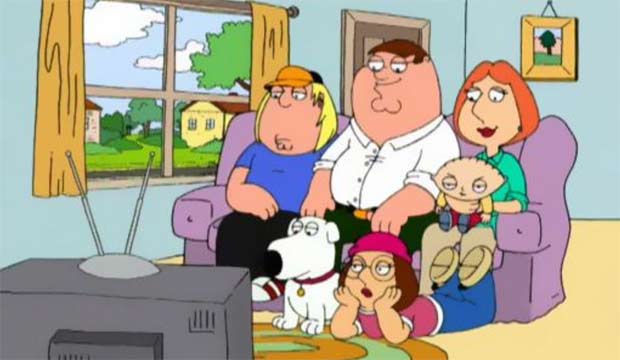 It’s time for a huge, freakin’ celebration because “Family Guy” has been on television for 21 years. The animated sitcom centers around Peter Griffin (Seth MacFarlane), a fat and not-too-bright blue collar worker living in Quahog, Rhode Island. His family consists of  Lois (Alex Borstein), his constantly ignored wife, Meg (Mila Kunis), their gloomy daughter,  Chris (Seth Green), the dim-witted middle son, Stewie, a baby bent on world domination and matricide, and Brian, the intellectual and alcoholic family dog (the latter two also voiced by MacFarlane). We don’t have a random cutaway to help commemorate this anniversary, but we did put together the 40 greatest episodes of the series ever, ranked worst to best. Click through our photo gallery above and see if your favorite episode made the list.

The show, created by MacFarlane, started out as a thesis project he was working on at the Rhode Island School of Design about a middle-aged man and his sophisticated dog called “The Life of Larry.” This landed MacFarlane a job at the infamous Hanna-Barbera animation studios. He continued to expand on the characters and eventually produced a series of shorts, “Larry & Steve.” The Fox network took notice of the shorts and commissioned MacFarlane to create a 15-minute short film. The characters of Larry and Steve eventually morphed into Peter and Brian. Fox, impressed with what MacFarlane produced, ordered “Family Guy” to series.

The program’s history on the air has been a very rocky one. It premiered after the Super Bowl in 1999 to 22 million viewers. The rest of the first season continued to get respectable ratings. However, in its second season, Fox moved the show around several times, pitting it against some of the highest rated shows at the time including “Who Wants to be a Millionaire,” “Friends” and “Survivor.” In May of 2000, Fox canceled the show but reversed course two months later. With Fox continuing to move the show to different time slots and giving very little advance notice about it, the show found it difficult to find a dedicated audience. “Family Guy” was officially canceled in May of 2002.

Then the craziest thing happened. Cartoon Network bought the rights to air reruns of the show. They began airing in 2003 during their newly created late-night programming block called, Adult Swim. It quickly became the highest rated show they had and would sometimes even beat their broadcast and cable competitors in the ratings. At the same time, the first and second season were released on DVD and sold like hotcakes. By the end of 2003, the DVD set had sold over 2 million copies and is currently the second highest selling television DVD of all time. Fox took notice and in May of 2004, two years after being canceled, the network resurrected “Family Guy” by ordering 35 new episodes to be produced. The show has not been canceled since then.

While the critical reaction to “Family Guy” has been all over the map, the Emmys have been very kind to the show. The show has been nominated for 27 Emmys, including four for Best Animated Program. The show also upended a lot of people’s Emmy predictions in 2009 by actually making it into Best Comedy Series, though it would lose that award to “30 Rock.” The show has won nine times, including three trophies for juried prizes awarded by the Animation branch of the TV Academy. One of those juried prizes was for MacFarlane’s voice-over performance as Stewie in 2000. MacFarlane has won three additional trophies: one for Best Music and Lyrics (“You’ve Got a Lot to See” in 2002) and two more for Best Character Voice-Over Performance in 2016 and 2017. At this past year’s Emmy ceremony Borstein collected the award for Best Character Voice-Over Performance in addition to her win for Comedy Supporting Actress for “The Marvelous Mrs. Maisel.”