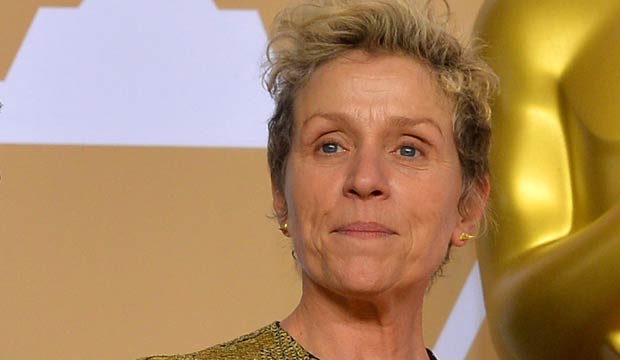 Free-spirited mom. Strict mother. Abused wife. Boozing adulteress. Mousy governess. Strong-willed nomad. With her talent for deadpan delivery and with one of the most expressive faces in the industry, Frances McDormand has created a treasure trove of complex and diverse characters over the past 40 years, earning numerous accolades along the way.

McDormand was born Cynthia Ann Smith on June 23, 1957, and was adopted when she was a year-and-a-half old and renamed Frances Louise McDormand. After studying theater, including receiving a Master of Fine Arts degree from Yale School of Drama, she quickly made a name for herself on stage, as well as in film and television.

In 1984, McDormand made her film debut in “Blood Simple,” the first film made by her new husband Joel Coen and his brother Ethan. She has collaborated with the brothers in seven other films, including her first Oscar-winning performance in “Fargo” (1996). In addition to her film work, she has continued to appear on stage and done extensive work on television as well, accumulating numerous honors and awards for the memorable and distinctive characters she creates.

In 1988, McDormand received her first Tony nomination for her portrayal of the iconic character Stella Kowalski in “A Streetcar Named Desire.” Although she lost that one, 23 years later she would receive her second Tony nomination, this time winning Best Actress for her limited run in the David Lindsay-Abaire play “Good People” in 2011. In 2015, she won a Primetime Emmy for the titular role in “Olive Kitteridge,” making her one of only 12 women to achieve the “Triple Crown of Acting,” winning competitive Oscar, Emmy and Tony Awards.
She also won a shared Emmy for producing the acclaimed limited series.

In 2018, McDormand won her second Best Actress Academy Award for “Three Billboards Outside Ebbing, Missouri,” becoming one of only 14 actresses to have won two or more Oscars in the lead category, placing her in the company of such legends as Katharine Hepburn, Bette Davis, Ingrid Bergman and Olivia de Havilland, as well as her esteemed contemporary Meryl Streep. With her nomination for “Nomadland this year,” she now has a total of six acting Oscar nominations- three for supporting, all of which she lost, but she’s won both of her previous lead nominations. Will she continue her Best Actress streak this year? She also has a chance at the Best Picture Award, as one of the producers of the acclaimed film.

McDormand is the rare performer who shines in a lead role, but is as equally effective in a supporting role, often turning just a few moments into some of the most memorable of a film. She is equally adept at playing a wacky character in a dark comedy as she is playing a straight dramatic role. Here are just a few of her best performances that show her versatility and unbeatable talent.