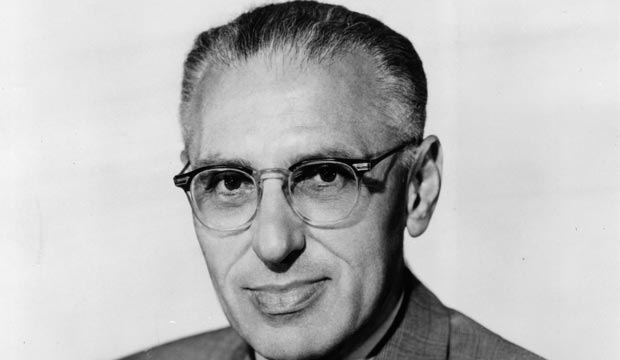 In a career spanning more than half a century, he directed films in almost every genre – screwball comedy, musical, film noir, thriller, literary adaptations. With his gentle nature, he coaxed 21 actors to Oscar nominations (with five winning), helmed seven films nominated for Best Picture (with one win), and was himself nominated for Best Director five times (with one win).

Acclaimed director George Cukor was born on July 7, 1899, on the Lower East Side of Manhattan in New York City to Hungarian-Jewish immigrants. As a child, he became infatuated with the theater and performed in amateur plays, once with future friend and mentor David O. Selznick. His father was an attorney, and Cukor was expected to follow in his path; however, he did not last long in law school, and soon found odd jobs in theater houses. He co-founded a stock company and alternated between directing shows for that and some for Broadway. After a few years Hollywood beckoned, as studios recruited from theater in the pioneering days of film.

In 1929, Cukor was signed by Paramount, and he acted as assistant director or dialogue director on a few features, including the acclaimed “All Quiet on the Western Front.” His first solo project was “Tarnished Lady” with Tallulah Bankhead in 1931. He left Paramount after a dispute with the studio over Ernst Lubitsch wanting sole directorial credit over a film Cukor had actually been assigned to direct. He then went to work for his old friend Selznick at RKO, where he found much success.

Cukor soon became known as a “woman’s director” due to the outstanding performances he seemed to elicit from actresses. One of his earliest favorites was Katharine Hepburn, with whom he made “A Bill of Divorcement”(1932). He went on to direct her in 10 films over 47 years, including classics such as “Little Women” and “Philadelphia Story,” and they became close friends in real life.

In Hollywood’s most golden year of 1939, Cukor had a hand in a couple of classics. Although uncredited, he spent a week on the set of “The Wizard of Oz,” where he made some makeup and costume changes that became part of the film, such as removing Judy Garland’s blonde wig and going for a more natural look. He also spent a good bit of time on “Gone with the Wind,” primarily supervising screen tests of the scores of actresses competing for the role of Scarlett O’Hara, and coaching actresses Vivien Leigh and Olivia de Havilland. There are conflicting tales of why he was removed from this project, with some saying Clark Gable wanted a more macho director, and some saying Selznick felt his pace was too slow. Whatever the reason, it freed him up to direct the all-female classic “The Women”, with Norma Shearer, Paulette Goddard, Joan Crawford and Rosalind Russell.

Between 1930 and 1972, he directed 21 different actors and actresses to Academy Award nominations, with five winning. Only three other directors – William Wyler, Elia Kazan and Martin Scorsese – have more acting nominations. Only four have more wins, and three tie his five. He rather disliked his label of “woman’s director”, as three of his acting wins were men. He directed seven films nominated for Best Picture, tying with three directors for that honor, and five having eight or more nominations. On his fifth Best Director nomination, he finally won himself, for “My Fair Lady” in 1964, becoming at the time the oldest director to ever win, a record he held until 2003.

In his personal life, it was a well-known “secret” that Cukor was gay. He owned a beautiful and luxurious home, and he became well-known for the elaborate parties he threw, many times for closeted homosexuals at a time when that lifestyle could ruin a career. Many prominent people from the film and literary worlds attended these soirees, and he valued his many close relationships with these friends.

For his 121st birthday, tour our photo gallery above featuring his 20 greatest films as a director. In addition to the movies already mentioned, our list includes “A Star Is Born,” “Gaslight,” “Adam’s Rib,” “Dinner at Eight” and more.