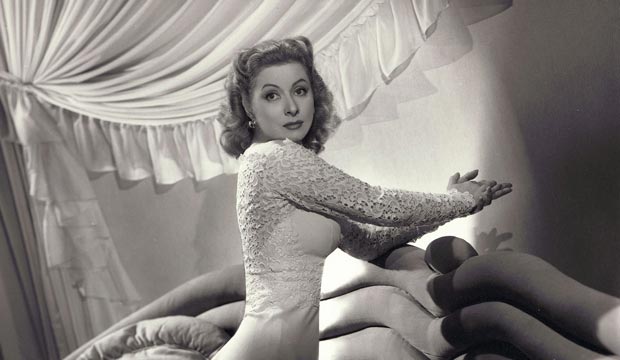 Film history buffs remember her as the winner who gave the longest Oscar acceptance speech. Perhaps she earned that right, as Greer Garson received an astonishing seven Academy Award nominations and starred in six Best Picture nominees – and only appeared in two dozen theatrical films.

English actress Garson was born on September 29, 1904. She led a rather unremarkable life until she started starring in local theatrical productions and making a couple of appearances in the earliest days of television. For the BBC, she starred in a 30-minute excerpt from “Twelfth Night,” which is the first known occurrence of Shakespeare being performed on television. She was discovered by MGM head Louis B. Mayer while he was scouting for talent. One of her first films was in the 1939 classic “Goodbye, Mr. Chips,” for which she earned her first Academy Award nomination for Best Actress.

The powers-that-be at MGM found their niche for the talented redhead, and cast her in a series of highly successful films over the next decade. Her elegance and poise made her the perfect leading lady for period pieces and melodramas. Her star ascended in the popular “Blossoms in the Dust” (1941), which earned her a second Academy Award nomination, and the first of five consecutive Best Actress Oscar nominations, tying with Bette Davis who had earned that feat in the years 1938-1942. That record stands today.

Garson won the coveted statue for her signature role in the World War II drama “Mrs. Miniver” in 1942. Although there are many urban myths as to how long her speech was, it actually clocked in at five minutes and 30 seconds, which is the longest Oscar acceptance speech according to the “Guinness Book of World Records,” and led to the Academy instilling a time limit. Her subsequent nominations were for “Madame Curie” (1943), “Mrs. Parkington” (1944) and “The Valley of Decision” (1945), two of which also starred her eight-time leading man, Walter Pidgeon. However, she felt that she was typecast as “Mrs. Miniver,” and could never shake that cloud.

Her star began to descend, and after her MGM contract expired in 1954, she only made a handful of films. She replaced Rosalind Russell as the title character in the Broadway production of “Auntie Mame” in 1958. In 1960, she portrayed Eleanor Roosevelt in the film “Sunrise at Campobello,” for which she received her seventh and final Oscar nomination and won the Golden Globe.

She appeared in only two more films in the 1960s, with the final being Walt Disney‘s “The Happiest Millionaire.” She narrated the stop-motion television Christmas special “The Little Drummer Boy” in 1968 and made her last screen appearance in an episode of “The Love Boat” in 1982.

Garson married three times. Her first marriage in 1933 to a British civil servant lasted a decade, but they lived separately after the honeymoon when he returned to his appointment in India. In 1943, she married actor Richard Ney, who was 12 years her junior and played her son in “Mrs. Miniver.” They divorced in 1947, and two years later she married Texas millionaire E.E. Fogelson. Together, they retired to a ranch in New Mexico in 1967 and became successful horse breeders. They remained married until his death in 1987.

On April 6, 1996, Garson died at the age of 91 due to chronic heart problems. Although her body of work was small, she made an indelible impression in the cinematic world. She could convey a ton of emotion with the arch of one delicate eyebrow, and she ranks high among the great actresses of that generation. Tour our photo gallery of her 10 greatest film performances, ranked from worst to best.