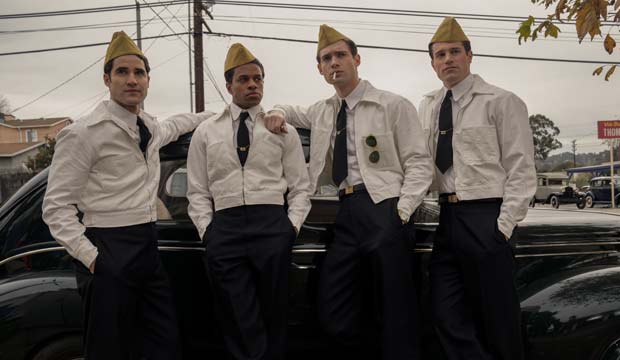 Ryan Murphy’s latest exploration of race and sexuality, set during the Golden Age of Hollywood, is currently streaming on Netflix. While the series is fictional, many of the characters are in fact based on real people who lived in and around the film industry during the late 1940s. Want to know more about the true stories behind “Hollywood?” Check out our photo gallery of the true life players who pop up throughout the show.

“Hollywood” follows several young men and women trying to achieve “the dream” of making it in Tinseltown. Jack Castello (David Corenswet) is a white serviceman just returning from the war struggling to get even a bit part. Raymond Ainsley (Daren Criss) is a half-Asian filmmaker desperate to produce more diverse films, especially if they star his African-American girlfriend Camille (Laura Harrier). Archie Coleman (Jeremy Pope) is a gay African-American screenwriter who feels pressured to write stories for a straight white audience, and who is in a budding relationship with a deep-in-the-closet young actor named Roy Scherer, better known as Rock Hudson (Jake Picking).

As they navigate the industry, they discover that the clean-cut image that Hollywood projects to the world is far from reality. There are spaces to be openly gay, but those spaces can still be exploitative and toxic. Though it is progressive for the time period, the many powerful people who run the town are hardly free from the same prejudices that affected the country in the late ’40s (and continue to this day). The series touches on real life events, such as the 1948 Academy Awards, the death of Bugsy Siegel and the Hollywood legend of Peg Entwistle, the actress who famously jumped off the top of the Hollywood sign. In doing so it attempts to portray the reality of a period in film history that is often overlooked.

Take a step back to 1947 Los Angeles as we explore the actors, directors, power brokers and gangsters who lived and worked (and frequently had romantic entanglements with each other) during that time period in our gallery of the 23 real people behind “Hollywood.”