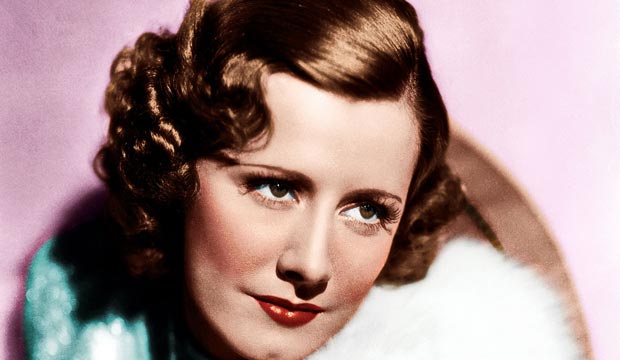 One of the great actresses nominated for the Academy Award multiple times (five) without a win and one of the best screwball comediennes of the Golden Age of Hollywood, Irene Dunne is considered one of the foremost performers of that era, known for her versatility, style and sophistication.

Dunne was born December 20, 1898, in Louisville, Kentucky. The daughter of a music teacher, she was raised around music and had a natural talent for it. She won a scholarship to the Chicago Musical College, and hoped to become an opera singer, but did not pass her audition with the Metropolitan Opera Company. However, she found success in musical theater, eventually appearing in several Broadway productions. While playing the lead in a road company of “Show Boat,” Dunne was discovered by Hollywood and was soon on her way to a varied and prosperous acting career.

Dunne displayed her impressive acting abilities almost immediately, receiving an Academy Award nomination for one of her first films, “Cimarron,” in 1930, quickly becoming an A-lister known for her flair for drama as well as her keen fashion sense. She found a new level of fame when, despite her initial distaste for the genre, she was cast in the comedy “Theodora Goes Wild” (1936), for which she was nominated for a second Academy Award, establishing herself as one of the legends of the screwball genre, with three-time costar Cary Grant telling her that she had perfect timing.

It is a bit puzzling as to why Dunne never won the coveted Oscar, as she was popular among her peers, known to be a lovely and gracious woman, as well as a talented performer. She displayed her versatility in a wide range of genres, with her five nominations encompassing four different genres – an epic western, two comedies, a drama and a romance. With her talent and list of classic films, it’s also a wonder that Dunne isn’t remembered along with her peers from that era. However, many of her films were remade in later years and those became the better known versions – notably “Anna and the King of Siam” was remade as “The King and I” and “Love Affair” was remade as “An Affair to Remember,” with both remakes starring Deborah Kerr, another actress who lost out on Oscar night several times. Or, perhaps it’s because her last film was over half a century ago 1952 with the lackluster “It Grows on Trees,” and she opted to quit while she was on top. Other than a few television appearances, she retired from acting.

Unlike others from her era, Dunne also stayed away from drama and scandal in her real life. She was married to Dr. Francis Griffin, a dentist, from 1927 until his death in 1965, and they adopted a daughter in 1936. In her later years, she remained active, devoting time to philanthropic causes, christening the Mark Twain River Boat at Disneyland in 1955 at the request of Walt Disney and becoming the first woman elected to Technicolor’s board of directors in 1965. In 1959, President Dwight Eisenhower named her an alternate delegate to the U.N. General Assembly. She received the Kennedy Center Honors in 1985 and died in 1990 at the age of 91.

Dunne was dubbed “The First Lady of Hollywood” because of her poise, charm and warmth, giving her a regal bearing that manifested itself on film. She once said, “I drifted into acting and drifted out. Acting is not everything. Living is.” And we are so lucky for the times that she drifted in, because she left us some of the most wonderful films from Hollywood’s Golden Age.

Tour our photo gallery above ranking her 12 greatest film performances from worst to best. Our list includes “I Remember Mama,” “Love Affair,” “The Awful Truth” and more.