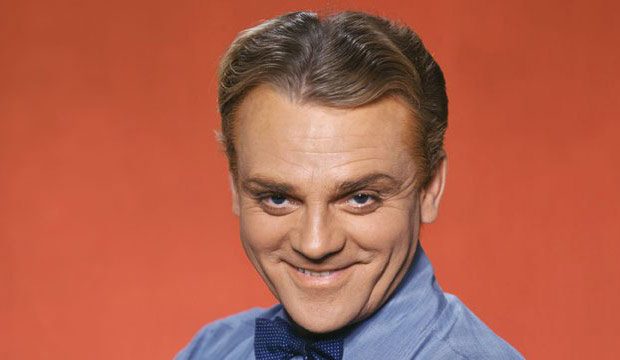 Song and dance man or gangster? Few stars of Hollywood’s Golden Era could claim they were equally well known for two such diverse genres. Yet, the legendary James Cagney worked hard to be able to make such a claim.

He was born on July 17, 1899, in New York City. His family was poor, and Cagney was sickly as a child. While growing up in a rough neighborhood, he learned a variety of skills, including tap dancing, street fighting, baseball and boxing. When he was 19, his father died, and he took odd jobs to help support his mother and siblings. On a whim, he auditioned for a role of a chorus girl in a local production. Although he had never had professional training, he landed the role and learned the dances from watching the other performers – and it never bothered him to dress as a girl and perform. Despite his mother’s desire that he get an education, Cagney decided to pursue stage work, gaining a role in the musical “Pitter Patter.” He continued to work several jobs at once, steadily sending money home, and met chorus girl Frances “Billie” Vernon, whom he married in 1922.

He continued stage work in New York and California for several years, finally gaining attention for a performance in “Penny Arcade” with co-star Joan Blondell. They were cast in the film version, and Cagney was given a contract to Warner Bros. He played in a few more films to good reviews before his breakout role in 1931 in the highly successful “The Public Enemy,” one of the films that set the standard for the gangster genre. Its success led to several similar parts until Cagney’s status as one of the top 10 moneymakers in Hollywood, as well as the enforcement of the Production Code that discouraged violence in movies, led Warner Bros to offer him non-gangster roles. The first time he danced onscreen was in “Taxi!” (1932) and he also re-teamed with Blondell to make the comedy “Blonde Crazy”(1931). They would eventually co-star in seven titles total; her wisecracking dame was the perfect foil to his fast-talking smart aleck. He also made several films with with his very good friend, fellow Irish-American Pat O’Brien that were hugely successful.

Cagney fought hard to maintain creative control over his career, earning the nickname “The Professional Againster”. He was one of the few stars of the day who was willing to walk out of a studio and find work in another venue before he gave in. In 1935, he became one of the first actors to win over a studio for breach of contract. As a result, he negotiated deals unheard of at the time, with large salaries, limits on number of movies made in a year and some creative control. Warner Bros wanted to pigeon-hole him into the gangster stereotype; he wanted to break free, so he eventually formed his own production company. However, it did not fare well, and after a few years, was back at Warner Bros.

His last film for Warner Bros in 1942 had been one he took great pride in, “Yankee Doodle Dandy,” for which he won the Best Actor Academy Award. His first picture back at Warner Bros in 1949 would become one of his most memorable films, and brought him full circle back to his gangster roots: “White Heat.” He made several successful movies over the next 12 years, but decided to retire to his farm after Billy Wilder‘s “One, Two, Three” in 1961. He turned down several parts over the next 20 years, including “My Fair Lady” and “The Godfather Part II.” However, in 1981, he accepted a small role in Milos Forman’s “Ragtime,” mostly to help overcome depression after a series of health problems. His final acting role was in the television film “The Terrible Joe Moran” in 1984.

Cagney was as active and persistent in his personal life as he was in his professional life. He and Billie adopted two children, and he remained faithful to her until his death from a heart attack on March 30, 1986. He and O’Brien, along with Spencer Tracy and Frank McHugh, were lifelong friends, earning the nickname the “Irish Mafia.” He continued to send at least half his salary to his mother until her death. He fought to gain and protect rights for actors, becoming the 50th member of the Screen Actors Guild, serving on the board for a decade before becoming its president in 1942. As a part of the Guild, he fought Mafia interest in the movie history; legend has it there was a gang hit on him that actor George Raft stopped. He was very active politically, and was influential in stopping studios from taxing actors and then sending underhanded financial support to a political candidate. During World War II, he toured military bases in the UK, giving several performances for the soldiers.

Besides his win for “Yankee Doodle Dandy,” Cagney received two other Best Actor nominations, for “Angels with Dirty Faces” (1938) and “Love Me or Leave Me” (1955). He received the American Film Institute life achievement award in 1974, Kennedy Center Honors in 1980, the National Board of Review Career Achievement Award in 1981 and the Presidential Medal of Freedom from good friend President Ronald Reagan in 1984.

Many actors, including Marlon Brando and Clint Eastwood, have pointed to Cagney as a powerful influence. Orson Welles once claimed that he “may be the greatest actor to ever appear in front of a camera.” Indeed, he is one of the greatest performers of his generation, his advice to many thespians being, “You walk in, you plant yourself squarely on both feet, look the other fella in the eye, and tell the truth.”