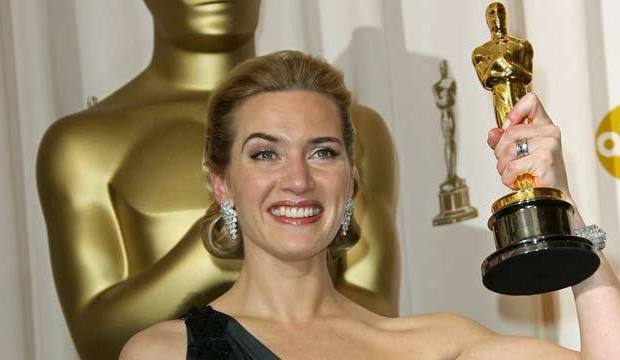 Kate Winslet represents the third generation of actors in her family. Her grandparents ran a repertory theater in England and her father struggled for many years as an actor himself while working other jobs to support his family. Winslet however found incredible success quite early in her career and by the time she turned 30, she had already received four Oscar nominations and played the female lead in the biggest box office blockbuster Hollywood had ever seen, “Titanic.”

While success in films came easy for Winslet, the one thing that did seem to elude her for a long time was recognition from the Academy. She would have to wait through five Oscar losses before the award would finally come her away for the 2008 movie “The Reader.” She would lampoon her Oscar troubles (and ironically receive an Emmy nomination) on an episode of the Ricky Gervais comedy “Extras.” On that show Winslet played a satirical version of herself who is so desperate to win an Oscar that she has taken a role in a film about the Holocaust because her agent has told her holocaust films always win Oscars. To add to the irony of it all the film she eventually did win an Oscar for, “The Reader,” was a Holocaust film.

Further complicating her Oscar history “The Reader” was not the film for which she wanted to win that year. Winslet had reunited with Leonardo DiCaprio on “Revolutionary Road,” directed by her then husband Sam Mendes, and it was that film for which she campaigned as Best Actress.

Winslet would go on to awards success on television with a remake of “Mildred Pierce” which earned her the Emmy, SAG Award and Golden Globe. She also has a Grammy, so she is just a Tony Award shy of EGOT status.

Gold Derby invites you to take a photo gallery tour of her 15 greatest films, ranked from worst to best. The gallery includes such movies as “Eternal Sunshine of the Spotless Mind” and “Sense and Sensibility.”