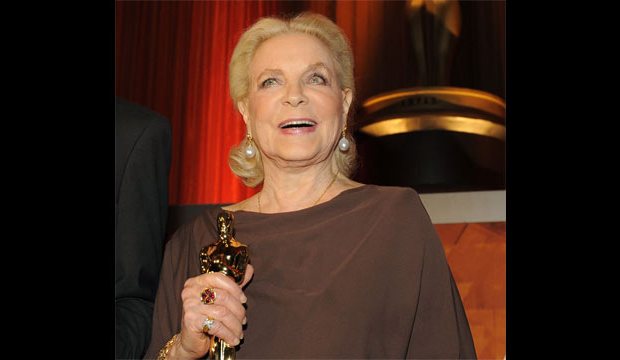 Hollywood icon Lauren Bacall made her feature debut with Howard Hawks‘ adventure yarn “To Have and Have Not” (1945). The film was a landmark for the actress in both her career and her life, since it was how she met her future husband Humphrey Bogart. The two would become a legendary couple off-screen and on, making three subsequent features together: “The Big Sleep” (1946), “Dark Passage” (1947) and “Key Largo” (1948).

Despite her hefty filmography, Bacall received just one Oscar nomination in her career: Best Supporting Actress for “The Mirror Has Two Faces” (1996), in which she played Barbra Streisand‘s domineering mother. After victories at the Golden Globes and SAG, Bacall looked like a shoo-in to finally clinch an Academy Award, yet lost to Juliette Binoche (“The English Patient”).

Bacall also had a successful stage career, winning two Tonys as Best Actress in a Musical (“Applause” in 1970 and “Woman of the Year” in 1981″). Her small screen work for the TV edition of “Applause,” a guest spot on “The Rockford Files,” and as a producer on “Great Performances: Bacall on Bogart” brought her Emmy nominations as well.

Although she never won a competitive Oscar, the Academy rewarded Bacall an honorary statuette in 2010. She received the Kennedy Center Honor in 1997 and was inducted into the American Theater Hall of Fame in 1998.

Rather than retire gracefully, the actress continued to stretch as a performer well into her twilight years, appearing in daring films from such directors as Lars Von Trier (“Dogville” and “Manderlay”) and Jonathan Glazer (“Birth”).

Tour our photo gallery of Bacall’s 15 greatest films, including a few classics that should’ve led to Oscar nominations.