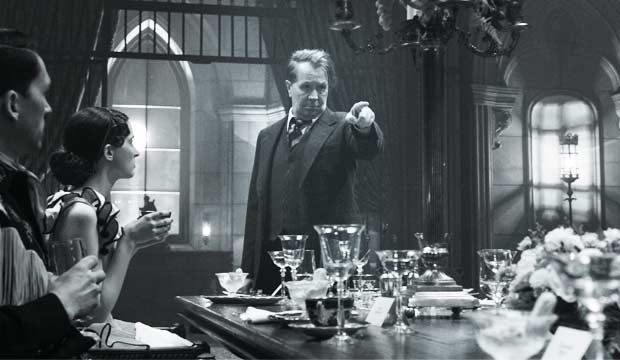 Director David Fincher’s latest work pays tribute to the golden age of Hollywood and one of the greatest films of all time. Written by his late father Jack Fincher, “Mank” follows screenwriter Herman J. Mankiewicz (Gary Oldman) through the world of the film industry in the 1930s as he is inspired to write Orson Welles’ masterpiece “Citizen Kane.” As dramatized in the film, Mankiewicz drew upon his experiences in the social circle of real-life newspaper magnate William Randolph Hearst (Charles Dance), to create the fictional Charles Foster Kane. Click through our photo gallery below to see the true life people and stories behind the characters of Netflix’s latest awards contender.

As portrayed in the film, “Citizen Kane” was nominated for nine Oscars, including Best Picture, but only won for Best Original Screenplay. Welles and Mankiewicz shared the writing credit and the award, though many debate the true degree of Welles’ contributions. Welles originally hired Mankiewicz as a script doctor who would receive no credit for his work, but towards the end of production the writer successfully lobbied to have his name on the picture. Though many have claimed that Mankiewicz deserved sole credit, most notably critic Pauline Kael and Mankiewicz himself, there is significant evidence that the final product was an equal collaboration between the two men.

Despite the filmmaker’s claims to the contrary, when “Kane” was released critics immediately noted the similarities between Kane and Hearst. Hearst banned all of his papers from reviewing or even mentioning the film, and many theaters wouldn’t show it out of fear of the tycoon’s newspaper empire. “Kane” was not an outright flop, but due to the pressure from Hearst it was not as successful as the studio had hoped. The film fell out of the public’s consciousness shortly after, but it began to regain critical status in the decades that followed. In 1962 the British magazine “Sight and Sound” ranked it as the best film of all time, cementing the classic in film history. For more of the fascinating true stories behind “Citizen Kane,” scroll through our gallery.