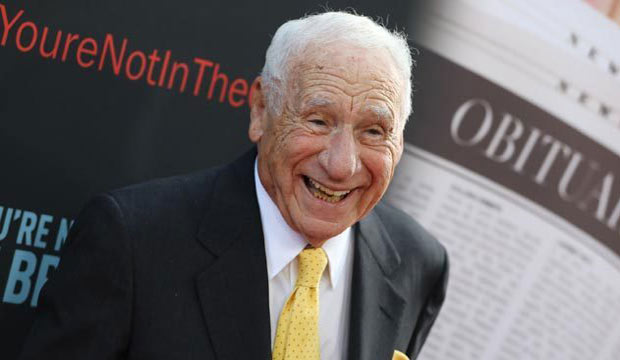 One of only 15 people to win the EGOT, legendary funnyman Mel Brooks has excelled on the big screen, the stage and television. But it’s his movies that have made him a household name. Let’s take a look back at 12 of his greatest films, ranked worst to best.

Born in 1926 in Brooklyn, New York, Brooks got his start as a writer for Sid Caesar on “Your Show of Shows,” working alongside Carl Reiner, Neil Simon, Danny Simon and Mel Tolkin. He then moved onto “Caesar’s Hour,” which added Woody Allen and Larry Gelbart to the writing team. The show brought Brooks three consecutive Emmy nominations (1956-1958), and he won his first prize for co-writing the 1967 reunion special. In 1965, he co-created the spy comedy “Get Smart” with Buck Henry, which brought him another Emmy bid for writing in 1966. He later won three consecutive awards for his guest role on “Mad About You” (1997-1999).

During this same period, Brooks and Reiner created their famous 2000 Year Old Man routine, with Brooks playing the world’s oldest living human. The highly successful comedy albums brought the duo Grammy nominations in 1961, 1962 and 1964, and a victory in 1999 for “The 2000 Year Old Man in the Year 2000.”

Brooks turned to filmmaking when he was 42 years old with “The Producers” (1968), a raunchy comedy about a hapless Broadway producer (Zero Mostel) and a nebbishy accountant (Gene Wilder) who decide to strike it rich by producing the worst musical ever: “Springtime for Hitler.” The classic satire brought him an Oscar for Best Original Screenplay and launched his successful big screen career.

It was with his parodies that Brooks hit his stride. In films like “Blazing Saddles” (1974), “Young Frankenstein” (1974), “Silent Movie” (1976), “High Anxiety” (1977) and “Spaceballs” (1987), the director spoofed westerns, horror films, silent cinema, Alfred Hitchcock and “Star Wars,” throwing caution to the wind with his bold, brazen sense of humor. He earned additional Oscar nominations for co-writing “Young Frankenstein” and penning the title tune for “Blazing Saddles.”

In 2001, Brooks brought “The Producers” to Broadway, where it won a record-breaking 12 Tonys, including three for him (Best Musical, Best Book of a Musical and Best Score). With that, he joined an elite group of just 15 people to complete the grand slam of Hollywood awards: the EGOT. Additionally, the show brought him two more Grammys in 2002.

As if he needed more awards for his mantle, Brooks also received the Kennedy Center Honors in 2009, the AFI Lifetime Achievement Award in 2013 and the BAFTA Academy Fellowship in 2017.

Brooks was married to actress Anne Bancroft from 1964 until her death in 2005. She made multiple cameo appearances in his films, including “Blazing Saddles” and “Silent Movie.” The two paired up for a remake of Ernst Lubitsch‘s “To Be or Not to Be” (1983), playing a Polish husband-wife acting team in WWII Europe. That film is included in our gallery even though it’s the only one featured here that he didn’t direct.