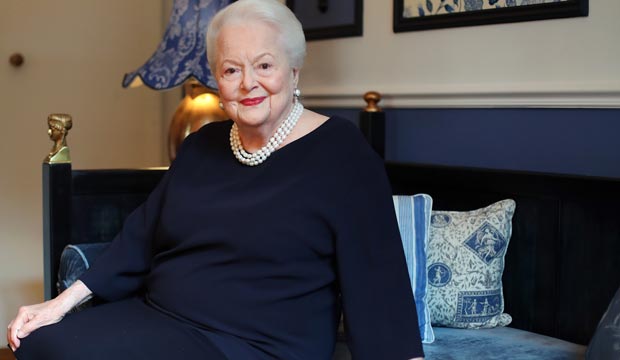 She received five Academy Award nominations in ten years, winning for Best Actress twice. She was the spunky heroine to Errol Flynn’s dashing adventurer. She was Melanie, the sweet, compassionate counterpart to the spoiled, passionate Scarlett. And she is now is the oldest-living survivor of the Golden Age of Hollywood.

Olivia Mary de Havilland was born July 1, 1916, in Tokyo, Japan, to British parents. Her sister, actress Joan Fontaine, was born 15 months later. Her parents divorced when the girls were young, and her mother eventually settled in California with her two daughters. Growing up, de Havilland enjoyed performing in amateur stage productions. Although she originally planned to become a teacher, a role in one of those amateur productions, “A Midsummer Night’s Dream”, changed her fate. She was discovered, eventually cast in the Hollywood Bowl production of that play, and then in the 1935 film adaptation.

Although her performance as Hermia was reviewed favorably, her next couple of projects were lackluster. However, that soon changed after the hugely successful swashbuckler “Captain Blood” paired her with Flynn, catapulting them both to stardom. She would make seven more films with Flynn in the next six years, including the classic “The Adventures of Robin Hood”, sealing their status as one of the greatest romantic pairings in film history.

Although she found success in her pairings with Flynn, as well as other period dramas and some screwball comedies, she longed to play something other than the supportive female love interest. She fought to play Melanie Hamilton Wilkes in “Gone with the Wind” when Jack Warner did not want to loan her out. Of course, this became one of the most successful films in history, and earned de Havilland her first Oscar nomination, this time for Best Supporting Actress.

Hoping the success of “Gone with the Wind” would lead to stronger roles, she was disappointed upon her return to Warner Bros. Over the next couple of years, she was suspended twice for rejecting scripts. Most of her roles in Warner Bros productions were unsatisfactory for her; she continued to look for more complex characters such as Melanie, but seemed to only find them when she was on loan to another studio. For example, she earned her second Oscar nomination for the Paramount picture “Hold Back the Dawn.”

When her seven-year Warner Bros. contract ended in 1943, the studio attempted to keep her six more months, citing her suspensions as reasonable cause. Most contracted players accepted this from the studios, but de Havilland fought, eventually winning her original suit as well as an appeal. This caused a major shift in Hollywood, resulting in the “seven year rule”, also known as the “De Havilland Law,” which lessened the power of the studios and gave more control to the performer. However, her victory almost cost her career – she was essentially blacklisted in Hollywood for two years.

In 1946, she came back with a bang with an Oscar-winning performance in “To Each His Own.” She then received back-to-back nominations in 1949 and 1950, for “The Snake Pit” and “The Heiress”, winning her second Best Actress Oscar for the latter.

She married and divorced twice, and had a child by each husband. She made fewer film appearances, taking time off to raise her children. In the 1960s, she received excellent reviews for a play she appeared in, wrote a best-selling book, appeared in a few more films and found success in television. Over the next couple of decades, she continued to work in both film and television, winning a Golden Globe in 1987 for Best TV Supporting Actress for her role in “Anastasia: The Mystery of Anna.” Her last screen performance was in the 1988 television movie “The Woman He Loved.”

Throughout the years, she and her sister Joan were also known for their ongoing sibling rivalry. According to biographers, they never got along, and their mother fueled the fire. They became the first siblings to be nominated in the same category at the same time at the 1942 Academy Awards. Fontaine won, and apparently did not act graciously towards de Havilland. This, among other incidents, led to years of estrangement, with brief periods of reconciliation. Sadly, however, the feud ended permanently with Fontaine’s death in 2013.

De Havilland has remained active throughout her retirement years, doing interviews and making appearances at award shows and film retrospectives. In 2008, President George W. Bush presented her with the National Medal of Arts. In 2017, she was made a Dame by Queen Elizabeth II.

For many, de Havilland has been immortalized as the sweet Melanie in “Gone with the Wind”. However, her career has spanned over half a century, with memorable roles in almost every genre of film. For true film buffs, she is not only Melanie, but also the beautiful Hermia in the fantasy world of Shakespeare, spunky Maid Marian to Errol Flynn’s adventurous Robin Hood, homely heiress Catherine Sloper and diabolical cousin Miriam. Happy 104th birthday, Dame Olivia de Havilland!