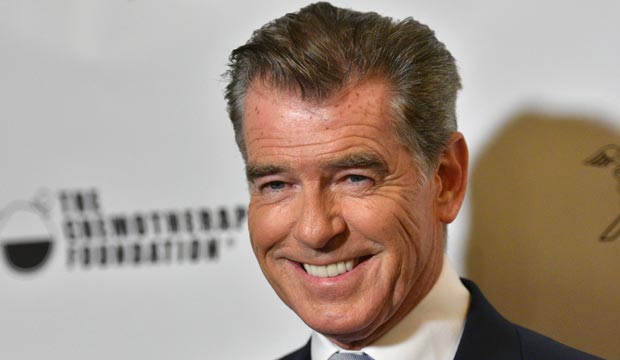 Pierce Brosnan will celebrate his 66th birthday on May 16, 2019. The Irish actor initially came to the attention of American audiences for his television roles first in a popular miniseries called “The Manions of America” and then on the long running series “Remington Steele.” On that show Brosnan played a private detective with a comedic somewhat satirical spin on the legendary spy character James Bond.

It came as a bit of a surprise then that roughly 10 years after that series ended Brosnan would be cast to become the next James Bond in “GoldenEye.” Sean Connery had famously created the character on screen, and then Roger Moore took over the part for a long run. Timothy Dalton was cast as the next James Bond in the 1980s when Brosnan was unable to accept the role due to his contract with “Remington Steele.” Dalton’s movies were not that well received and he only did two of them. The series seemed to be dying off when Brosnan was given a second chance at the part and clicked in the role much more than Dalton did.

Brosnan also managed to establish himself as a screen actor in various roles outside of the Bond films. That accomplishment is quite significant since many of his 1980s peers weren’t able to manage the transition from the small screen to the big one. For every Bruce Willis who became a bonafide box office star, there was a Tom Selleck who struggled to be taken seriously in the other medium.

Brosnan’s film appearances have run the gambit from action films, to comedies, to heavy drama and even some not entirely successful leaps into musicals. Tour our photo gallery above of his 15 greatest performances, ranked worst to best, including his James Bond movies, “The Thomas Crown Affair,” “Mrs. Doubtfire,” “Mamma Mia” and more.

ACE Eddie Awards: 'The Trial of the Chicago 7' wins over Oscar rivals for Best Film Editing