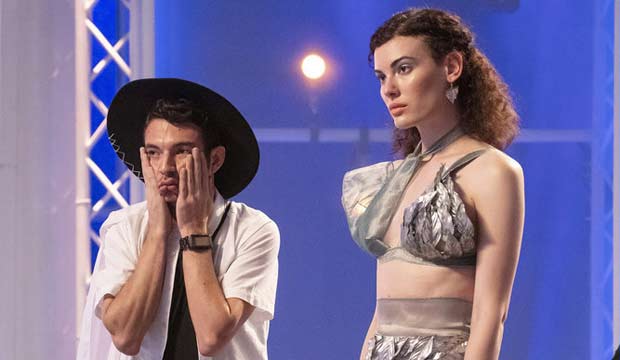 In fashion, one day you’re in and the next you’re out. And these “Project Runway” designers were really far out. Scroll down to see all of the worst looks of season 18 as decided by judges Karlie Kloss, Nina Garcia, Elaine Welteroth, Brandon Maxwell and a variety of special guests.

“Project Runway” ousters often fall into one of two categories. Some designers are eliminated for a drastic lack of taste: too weird, too eccentric, too inappropriate, with way too much fabric or way too little. Those are the baffling designs with too many competing ideas that look like they belong on another planet.

Then there are looks with the exact opposite problem: they’re too plain, too ordinary. They don’t express much of a point of view. Even when they’re finished, presentable and well-constructed, they’re so boring they offend the sensibilities of the judges who are looking for originality and not for designs they could already find in most department stores.

When given the choice, the judges often prefer bad taste to bland taste, and it’s hard to blame them. After all, it’s more fun to watch a designer to take a big swing even if they strike out than to watch someone play it safe. But fashion is in the eye of the beholder, so maybe the judges’ most hated looks include some of your favorites. Goodness knows the designers themselves are often confused by the judges’ verdicts.