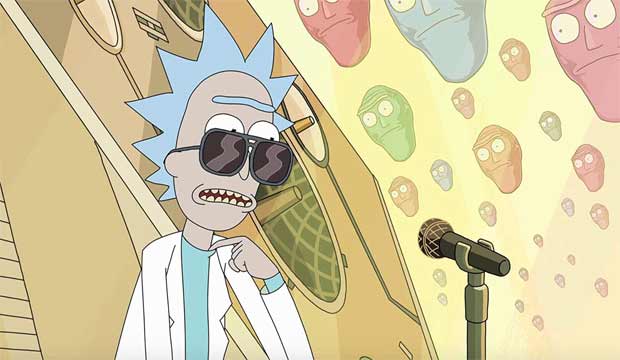 Wubba-lubba-dub-dub! Rick Sanchez has been dragging his grandson Morty Smith across the galaxy for four seasons and counting, and the latest batch of episodes premieres on May 3rd. If you can’t wait to jump back into the multiverse, we’ve collected 20 of Rick’s funniest one-liners and most irreverent zingers.

“Rick and Morty” began life as a crude riff on “Back to the Future,” created by animator Justin Roiland. In that short, Rick was nothing more than a vulgar parody of Doc Brown, but the underlying idea of the character was present: he has a passion for science and no qualms about convincing his grandson Morty to do ridiculous and horrible things. With the help of “Community” creator Dan Harmon, that dynamic was fleshed out into the show we know today. Rick was given substantial depth as the series has explored his toxic relationship with his family as well as his own self-loathing and self-destructive behavior, but it’s still hilarious to hear him dryly mock a terrifying alien invader.

The show was initially a cult hit, gaining the kind of nerdy teenage fans who usually watch Cartoon Network’s Adult Swim, but it has rapidly grown in mainstream popularity. In 2018 the series received its first Emmy for Best Animated Program, and it has expanded to comic books and video games. The duo even appeared in a couch gag for “The Simpsons,” where Rick crashes his spaceship into the iconic TV family. For a taste of why the sci-fi comedy is so widely beloved and acclaimed, check out our gallery below of some of Rick’s best quotes.