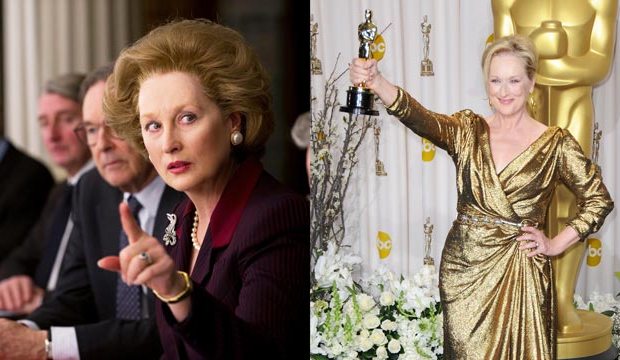 “The right actors win Oscars, but for the wrong roles,” Katharine Hepburn once said. She should know. Her first of four still-record acting wins was in her third feature, 1933’s “Morning Glory,” when she played an aspiring actress — not exactly a stretch for her back then. Me, I like the Great Kate best when she is matched with a male sparring partner who is at her level, such as Humphrey Bogart in 1951’s “The African Queen” or Spencer Tracy in 1942’s “Woman of the Year.”  But I can’t grouch too much over her later-life wins for 1967’s “Guess Who’s Coming to Dinner,” 1968’s “The Lion in Winter” or 1981’s “On Golden Pond,” given that her co-stars were Tracy, Peter O’Toole and Henry Fonda.

Which 12 actresses won Oscars for the wrong roles? Our “right actress, wrong role” for leads photo gallery above features Meryl Streep, Nicole Kidman, Kate Winslet and more. Who mostly deserves to be the source of raucous outrage and polite debate. Share your own example that you feel strongly about in the comments section below or make a case for the wins below.