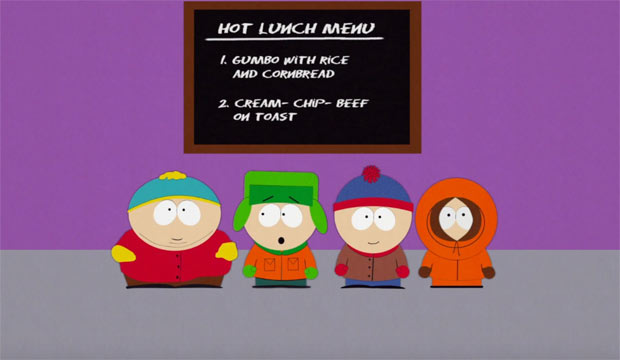 “South Park,” Comedy Central’s hit series centered around four foul-mouthed young boys in a small Colorado town, has returned for its 22nd season. To celebrate this momentous occasion, we’ve got the 40 greatest episodes of the series, ranked from worst to best. Click through our photo gallery above and see if your favorite episodes made it on to the list.

The show made its debut in August of 1997 with the infamous pilot, “Cartman Gets an Anal Probe,” which quickly established the show’s humor and raunchy themes. Most critics were, at first, not very fond of the series. The consensus of their reactions found that the show was vulgar, childish, and low-brow. While critics were not kind to it, the show quickly found an audience. The pilot received just short of a million viewers. By the time the first season concluded, the program had become Comedy Central’s biggest hit in their history with the season finale drawing over six million viewers.

Emmy voters were quick to recognize the show as the first season received an Emmy nomination in 1998 for Best Animated Program for the episode, “Big Gay Al’s Big Gay Boat Ride.” “South Park” has since become a mainstay in the Animated Program category garnering 15 additional nominations in the category and winning it four times (2005, 2007, 2009 and 2013). The show also garnered a win for Best Animated Program (More Than One Hour) for “Imaginationland” in 2008 and two additional nominations for Best Character Voice Over in 2016 for creators, Trey Parker and Matt Stone. It also received a Peabody Award in 2006 and was named one of the top ten television programs by the American Film Institute in 2004 and 2006.

The show also served as a spring board for the impressive careers of Parker and Stone. In 1999, they released “South Park: Bigger, Longer and Uncut” which grossed $83 million worldwide and even garnered an Oscar nomination for Best Original Song (“Blame Canada”) for Parker and fellow composer, Marc Shaiman. Their next film, the marionette-action-comedy “Team America: World Police,” would gross over $50 million.

In 2011, Parker and Stone collaborated with “Avenue Q” composer Robert Lopez to create the Broadway musical, “The Book of Mormon.” The show was an instant success with both critics and audiences. It earned nine Tony Awards including Best Musical. Parker and Stone both claimed Tonys for Best Book of a Musical and Best Original Score and Parker earned an additional one for Best Direction of a Musical. The pair also won the 2012 Grammy Award for Best Musical Theater Album. This leaves Parker and Stone only having to win an Oscar in order to complete their EGOT.