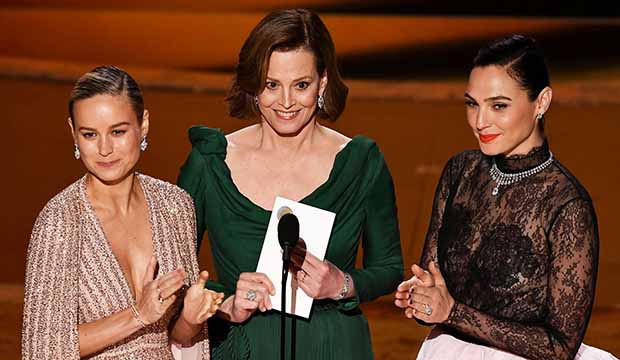 In 1919, the year before the 19th Amendment giving women the right to vote was ratified, “America’s Sweetheart” Mary Pickford co-founded United Artists, a studio that continues producing films 100 years later.

Despite efforts and contributions of women like Pickford, Hollywood has remained largely male-dominated. However off-screen, women have continued to fight for equal pay, challenge “casting couch” policies and make advancements in male-dominated behind-the-scenes jobs, blazing trails for the women who follow. Onscreen, actresses have portrayed real-life women who fight for causes and women who have impacted the world, as well as fictional women who inspire and generate laughter, tears and sisterhood.

Despite the struggles women have faced bringing their stories to the big screen, there are many triumphs to be celebrated. In the Golden Age of Hollywood, the male-dominated studio system recognized the value of “women’s pictures” and actresses such as Bette Davis, Katharine Hepburn, Joan Crawford, Olivia de Havilland, Rosalind Russell, Carole Lombard and Mae West, just to name a few, brought alive women who were smart, strong, funny, quirky and compassionate.

In later years, the women’s liberation movement ushered in performers such as Jane Fonda, Pam Grier, Carrie Fisher and Shirley MacLaine who showed female empowerment and the changing roles of women in society. We now have actresses including Jennifer Lawrence, Viola Davis, Gal Gadot, Saoirse Ronan, Octavia Spencer and Jodie Foster who bring to life superheroes, both real and fictional, and continue to show the value of womanhood and the strength which lies in all of us. In addition, we now have an increasing number of women flourishing behind the screen, most notably directors and/or writers such as Greta Gerwig, Patty Jenkins, Lulu Wang and Olivia Wilde – in fact, there was a record number of female-directed movies in 2019!

Tour our photo gallery above, which features a look at films that will make you laugh, make you cry, inspire you, sometimes enrage you and will hopefully entertain you in a time when that is needed desperately. It includes our choices for the 40 greatest female-driven films with remarkably strong women who take charge and are heroines in all types of ways.