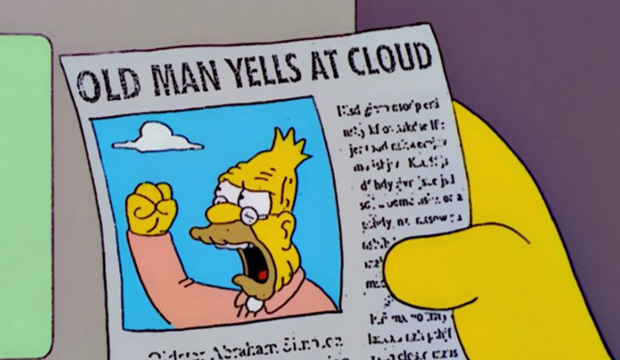 While Homer, Marge, Bart, Lisa and Maggie may get the lion’s share of credit for making “The Simpsons” work, the extended family also plays a vital role in the show’s humor. No character better exemplifies this than Abraham “Grampa” Simpson. To celebrate this endearing old coot’s sensibility and what he has brought to the show for the past 31 years, we’ve put together 20 hilarious instances of Grampa’s crazy and rambling diatribes.

“The Simpsons” originated from the mind of cartoonist Matt Groening and first started airing as shorts on “The Tracey Ullman Show” in the late 1980s. With the assistance of Oscar and Emmy winner James L. Brooks and Sam Simon, Groening developed the concept into a half-hour program that debuted on Fox in December of 1989. To date, the show has aired over 670 episodes, making it the longest running scripted series in primetime television.

Groening first came up with the idea for Abe Simpson when he wanted to add a crotchety old character who complained a lot and dreamed up incredulous stories. Grampa Simpson has been around since the Tracey Ullman shorts with his voice being provided by Dan Castellaneta. He made his first appearance in January of 1988 in “Grampa and the Kids.” In the short, Grampa is telling Bart and Lisa about the good old days but when they start to ignore him, he pretends to die to get their attention back.

Since then, our favorite resident of the Springfield Retirement Castle has been keeping us amused on a regular basis with complaints about modern culture, a constant need for attention and a laundry list of exaggerated stories from his past. Whether he’s remembering the time he took a ferry to Shelbyville, complaining that the president is a “Demy-crat,” or telling of how he filled the Statue of Liberty’s head with garbage, it’s a presence that we know we will never get tired of even if the rest of the family is well beyond being able to tolerate it. Check out the list below and see if you’re favorite invective made the list!