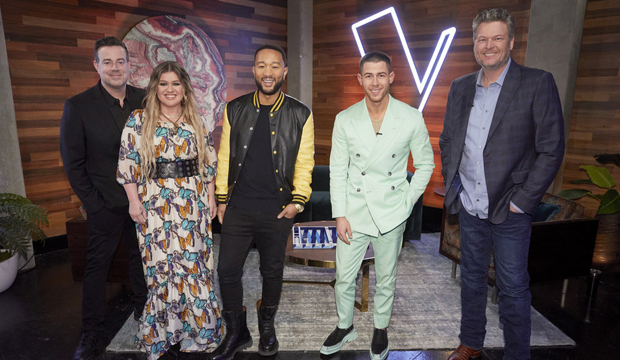 The Voice” season 20 finalists compete on three weeks of live shows starting May 10 before the winner is crowned on May 25, 2021. Each of these artists is on one of four teams coached by music superstars: three-time winner Kelly Clarkson, one-time champ John Legend, relative rookie Nick Jonas, and seven-time victor Blake Shelton.

“The Voice” season 20 kicked off on March 1, 2021 with the first of six shows dedicated to showing the best (and worst) of the blind auditions. At end of these half dozen episodes, 40 artists moved on to the battles. The battle advisors were Luis Fonsi for Team Kelly, Brandy for Team Legend, Darren Criss for Team Nick, and Dan + Shay for Team Blake. This round of three episodes ended with seven artists on each of the four teams (5 won battles, 1 save, 1 steal).

Two dozen of these artists competed against each other in a dozen knockouts. The 12 winners of these moved on to the live shows as did the four coaches’ saves. The final artist in the Top 17 was voted on by the public after the 4-way knockout. Below you can see photos of each of the Top 17 contestants, find out the team they are on, the songs they’ve sung to date, and how they did in the competition.