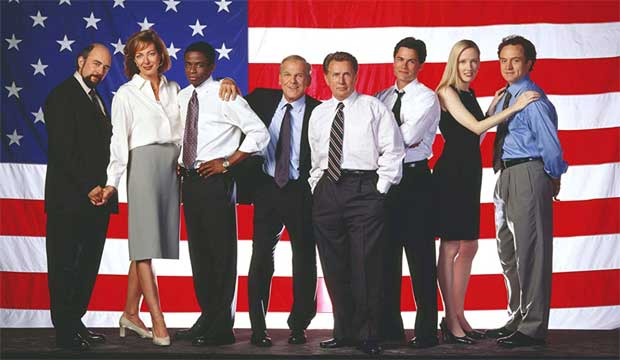 In today’s troubled political times, “The West Wing” feels even more quaint and nostalgic than it did when it premiered 20 years ago, which means we need it now more than ever. An idealized vision of a Presidential administration functioning at its very best despite Washington’s many complications, the Aaron Sorkin-created series captivated audiences with its whip-smart dialogue and dense storytelling. In honor of its 20th anniversary, let’s take a look back at 20 of its greatest episodes, ranked worst to best.

Throughout its seven season run, the show racked up an impressive 95 Emmy nominations and 26 wins, including four consecutive prizes in Best Drama Series (2000-2003). In its first season alone, it broke the record for most victories in a single season with nine (“Game of Thrones” surpassed it in 2015 with 12). Alda, Channing, Janney, Schiff, Spencer and Whitford all won individual acting prizes, while Hill, Lowe, Moloney, Parker and Sheen earned nominations.

So raise the flag and have a bowl of President Bartlet’s homemade chili as we count down the 20 best episodes of this Emmy-winning classic in the photo gallery above. Our list includes the “Pilot,” Christmas episodes “In Excelsis Deo” and “Noel,” “Two Cathedrals,” “Let Bartlet Be Bartlet” and more.