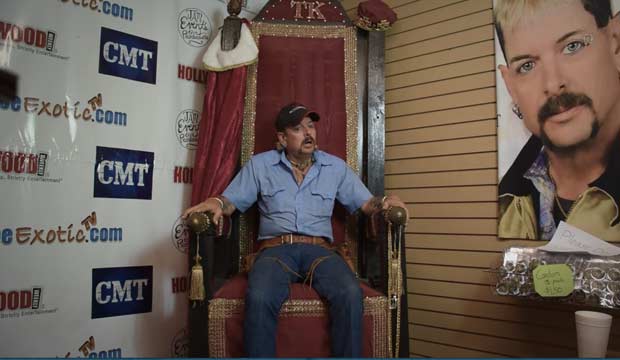 While the country is forced to stay inside their homes, we are lucky to have a show like “Tiger King: Murder, Mayhem and Madness” to keep us all occupied. The series tells the true story of Joe Exotic, the owner of a private zoo in Wynnewood, Oklahoma with an affinity for big cats. As the show delves deeper into his world, it becomes clear that everyone in his orbit has their own bizarre story to tell. Put on one of Joe’s many country music albums as you scroll through our gallery of the strangest and sketchiest characters featured in “Tiger King.”

In 2019, Exotic was convicted of 17 federal charges of animal abuse, as well as two counts of murder-for-hire in regards to a plot to kill Carole Baskin, the director of Big Cat Rescue. The Netflix docu-series chronicles the long and strange journey that led to his conviction.

Exotic began his largely one-sided feud with Baskin due to her efforts to ban the private ownership of big cats such as tigers and lions in the US. Originally he posted negative videos on his YouTube channel and on Facebook, but it escalated when he attempted to start a company with a very similar logo to Baskin’s Big Cat Rescue. Baskin and her husband successfully sued Exotic for a large sum of money, and he was forced to seek out other forms of financing. He signed over his zoo to Jeff Lowe, a local investor, but the two were at odds with each other up until Exotic fled to escape the murder-for-hire charges. He still maintains that it was all a scheme by Lowe to get rid of him.

As the series chronicles Exotic’s rise and fall, including a failed campaign for president and then governor of Oklahoma, it also explores the lives of the many zookeepers who worked for the eccentric zookeeper, as well as several people in the larger big cat community. In the process it paints a picture of a system that encourages abuse and exploitation, and only attracts the seediest of society’s outliers.

Check out our gallery as we count down the skeeziest and sketchiest of the motley crew that is the cast of “Tiger King.”