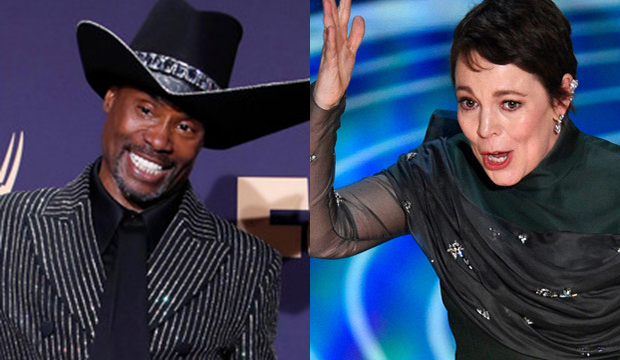 As the year draws to a close, all of us here at Gold Derby are once again thinking about our favorite awards moments of the past year and it’s obvious that 2019 did not disappoint. They spanned the spectrum of what we love to see with the great showbiz awards: Shocking wins, amazing speeches, hilarious presenters and knockout performances. As we do every year, we asked our editors and contributors to name their favorite moments from the Oscars, Emmys, Tonys, Grammys, Golden Globes and more in the photo gallery above. Do you think we forgot to mention anything on this list? Be sure to sound off and let us know your favorites in the comments below.

The most personal moment definitely came from our longtime senior editor Rob Licuria, who traveled all the way from Australia to attend this year’s Emmy Awards! Calling the opportunity “a dream come true would be an understatement,” he says. It was a night filled with unforgettable moments for Rob and his wife Paula, including sitting behind Julia Garner‘s family in the audience who went nuts when Garner claimed Drama Supporting Actress for “Ozark” and getting to chat with the iconic Julia Louis-Dreyfus.

Several moments came in the form of giant upsets that caught our staff by surprise. Jeffrey Kare singled out Glenn Close‘s shocked reaction and speech after winning the Golden Globe for Best Drama Actress for “The Wife,” noting that “you could tell how much the award meant to her.” Tom O’Brien chose the upset that caused Close to lose the Best Actress Oscar by picking Olivia Colman‘s speech after winning for “The Favourite.”

Overdue career recognition proved to be another recurring theme with this year’s selections. Zach Laws is still ecstatic about Spike Lee‘s first competitive Oscar win for “BlacKkKlansman,” calling it “a fitting tribute to the man who opened doors for generations of black filmmakers.” Sam Eckmann chose the Tony win for André De Shields (Musical Featured Actor for “Hadestown”) noting that it was “only fitting” that the veteran actor gave his three rules for longevity and success.

There were also a solid amount of choices that were just about seeing people we like being able to achieve a big win. Tony Ruiz was very fond of Billy Porter‘sEmmy win (Drama Actor for “Pose”), calling it “a moment of unadulterated joy and true progress.” After selecting Regina King‘s surprise Emmy win last year, Cordell Martin stuck with King by choosing her Oscar win for “If Beale Street Could Talk.” Chris Beachum was especially fond of the legendary Bob Newhart being bestowed with the first ever celebrity to receive the Gold Derby Career Achievement Award earlier this year.

Our gallery above also includes Michelle Williams, Bradley Cooper and Lady Gaga, Alex Trebek and Jharrel Jerome and more. Look through our Top 18 to remember a great year across all of the awards ceremonies. Hopefully we’ll have even more to look forward to in 2020!