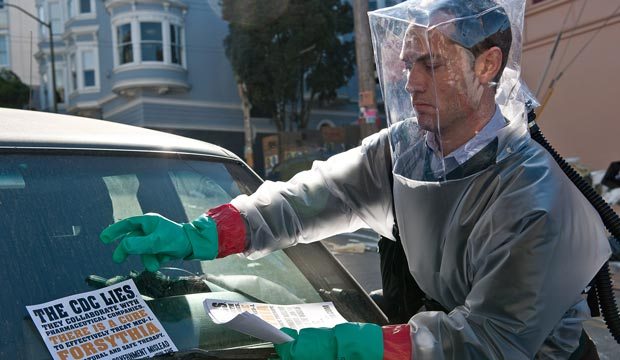 I am 49 years old and cannot recall a time when there was a worldwide concern that has led to multiple shutdowns. Concert venues, sporting events, flights, schools, amusement parks are all taking precautions to prevent the rampant spread of the coronavirus. Many times over the past few days I have heard (and thought to myself), “this is like something out of a movie. . .” And, indeed, Hollywood has provided many scenarios of what a viral outbreak might look like. Tour our photo gallery featuring our choices for the Top 20 pandemic movies while holed up in front of your television or computer.

Outbreaks in these films originate from a variety of sources – an alien pathogen, a chemical being developed for biological warfare, an animal, and sometimes an unknown, unidentifiable source. This is all scary stuff, and that’s why these films usually fall into the sci fi and/or horror categories. However, in the end, good usually triumphs. And while the thought of being locked up in our houses for a short period of time to keep us safe from a bigger coronavirus outbreak is also scary stuff, maybe some of the following films, including “Contagion,” “28 Days Later,” “World War Z” and “Outbreak,” will at least keep us entertained.