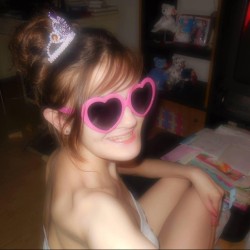 ~CeCe-23-Solo~ Hey what's up, I'm Chelsea and I'm from Canada! I love MOVIES & the movie industry in general. My dream job would be some type of Entertainment Media job like Movie Critic. Having said that though I do think that being a movie critic would perhaps take my joy out of movies. Anyway I am from a Small town (Born and raised) Love movies, devour books, partake in Special FX Makeup artistry (totally self taught) and enjoy the fine arts. Including and not limited to Dancing like a maniac in my home and singing (preferably where no one can hear me.) However I'm going to contradict myself with my last statement. I LOVE Amateur Theater and acting on stage (have since I was 5 in my first school play.) I have become pretty involved with my local Community acting group, having acted in 4 plays with them since my first Play way back in 2008 - where I played a Postulant Nun in the nun's choir in the Sound of Music during which time I learned LATIN. Meaning I learned to sing in Latin. This past fall I had the privilege to be cast in my first Principal Role with the group where I played another Nun in another Musical (HEY look progress after 6 years with the group.) I had the honor to Play SIster Amnesia in our production of Nunset Boulevard (Part of Dan Groggins Nunsense Musicals.) IT WAS a ROLE that I truly connected with for the first time and truly became the character. It was also an experience I loved working with a close ensemble cast of 4 other extraordinary women to support me during our time together! What's up GoldDerby? Anyone - anyone at all? Oh it's just me creeping my own profile all the time. Oh okay that's cool, lol. So now that I've moved past my Awkward rookie year at Gold Derby (technically I reached that Mile stone on the 3rd but technically my first predictions were the SAG TV & film awards respectively. Alas enough about me & my gold derby success. Oh snap wait did you know who Ranked 2nd in Reality TV prediction leader boards for the 2014 Season? Anyone? Anyone at all? Oh all right I'll tell you - it WAS ME.