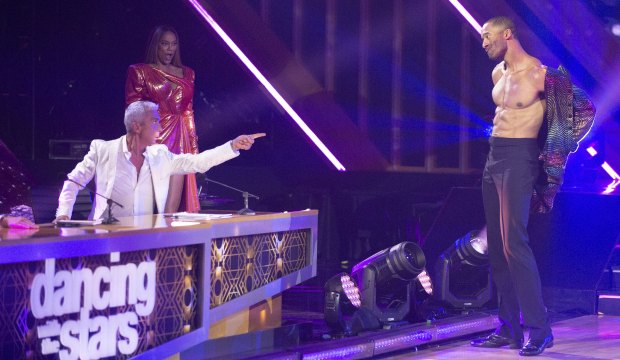 It wouldn’t be “Dancing with the Stars” without some gratuitous male nudity, and “Bachelor” alum Matt James provided that in week two of the competition when he disrobed right in front of Bruno Tonioli during his samba at the beginning of the night. But not everybody on the judging panel appreciated that particular flex. Watch the performance above, and see what the judges had to say about Matt James shirtless below.

SEE‘Dancing with the Stars’ First Elimination night recap: How did ‘DWTS’ deal with Cheryl Burke’s COVID, and who was sent home? [UPDATING LIVE BLOG]

Len Goodman: “Instead of worrying about taking off your shirt, which was totally unnecessary, you would have been better served working once again on your hips. They are nonexistent. Honestly, your hips are allergic to music — work on your hips!”

Derek Hough: “I think what Len is trying to say is also work on your bounce. In the samba, we need bounce. We need that rise and fall that gives that hip action, that rhythm going. Also, just for the future, think about those feet because that’s going to happen in every single dance, right? Turn those suckers out. But dude, you’re a great performer. You’re so fun to watch. Well done.”

Bruno Tonioli: “I’m still in orbit, actually. Funny, there are so many things in my mind I want to say, but nothing to do with the samba whatsoever. I just wonder why.”

Carrie Ann Inaba: “Amazing physique, but what I was missing was the bravado that you had and the confidence you had when you ripped your shirt off. It lasted for like two seconds, and then you kind of started dancing small. A little awkward, and there was a lift at the end. Welcome back, but keep those feet on the ground. Keep them on the ground, the toes on the ground the whole way.”

So to paraphrase poet laureate Shania Twain, the eye candy didn’t impress them much. James scored fives from Inaba and Goodman and sixes from Hough and Tonioli for a total of 22 out of 40. And when that was combined with last week‘s judges’ scores he found himself tied for 13th place out of 15 contestants on the leaderboard. Luckily for James, “Bachelor Nation” is a reliable bloc of fan voters, so it wasn’t a surprise at the end of the episode when he was announced as safe from elimination. But if he wants to do better than the “Bachelor” stars who came before, he’s going to need to refine his moves. Because the hips don’t lie.

MAKE YOUR PREDICTION: Who will win "Dancing with the Stars"?
To save your prediction, you must log in to Gold Derby. Click here to sign in with existing account -- or create a new one.