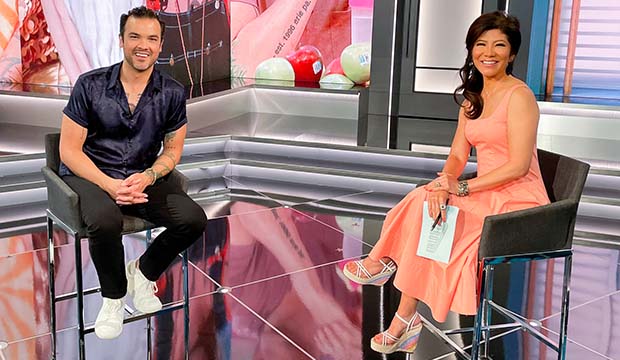 After a fiery speech to his fellow houseguests, Daniel Durston was evicted on Thursday’s live episode of “Big Brother.” He was nominated alongside his “Festie Bestie,” Kyle Capener, after they replaced Joseph Abdin, Monte Taylor and Terrance Higgins on the block. The 35-year old from Las Vegas was sent packing in a 8-1 vote (Terrance tossed him a bone). In return, Daniel hugged his friend goodbye and whispered something in his ear. Head of Household Michael Bruner can now add the slaying of Daniel to his resume, which is building up quickly after five early comp wins.

“You bolted, and the only person you hugged was Terrance,” host Julie Chen Moonves said to Daniel as he walked out the door. “What did you whisper to him?” Daniel responded, “I whispered, ‘I left a gift underneath your pillow.'” But it wasn’t one of significance, just some hair wax that had become an inside joke since Terrance wasn’t in need of such a product.

Next, Julie asked about Daniel’s speech, in which he called the houseguests “clowns” and “boring” before going off on Michael. “As soon as Nicole [Layog] left the house I knew I was done,” he admitted. “As the week went forward I realized I only had Jasmine and Terrance, officially, so it was really hard to get more votes, which is five. With this speech I just wanted to let them know I’m aware of what’s going on. Hopefully the house, who seems to be the people I have to teach how to play the game, hopefully they become aware that Michael’s sweeping the game. He’s the best player this show has seen in a while. I do respect him as a player, but I had to say what I had to say.”

When asked if he assumed any responsibility for Nicole’s eviction last week after using the Veto to remove Alyssa Snider and Indy Santos from the block, Daniel said, “I do not because I was not the Head of Household that put her up. We talked about it. We went through every scenario possible. If we didn’t have Indy and Alyssa as numbers, there’s no way we could have moved forward as a bigger alliance to take over the house. We knew it was a risk. When it happened, I figured I’m the next one out.”

Last, Julie asked why Daniel was so hellbent on getting Taylor Hale evicted. Wast it personal or strategic? “It was both,” he replied. “Personal because I love Paloma [Aguilar] like a sister, so when I heard [Taylor] kind of lie about her it really affected me emotionally. I’m a really loyal, loving friend. So that affected me there. Then it enters game because Paloma was a number for me. I considered her a number two even after eight days. I’m glad we (Daniel and Tayor) have had time to talk throughout the rest of the season.”

Preceding Daniel’s Day 37 eviction were Paloma Aguilar on Day 8, Joe ‘Pooch’ Pucciarelli on Day 16, Ameerah Jones on Day 23 and Nicole Layog on Day 30. All remaining houseguests will be part of the jury and vote for the Season 24 winner. The new HOH will be revealed on Sunday’s episode at 8/7c on CBS.