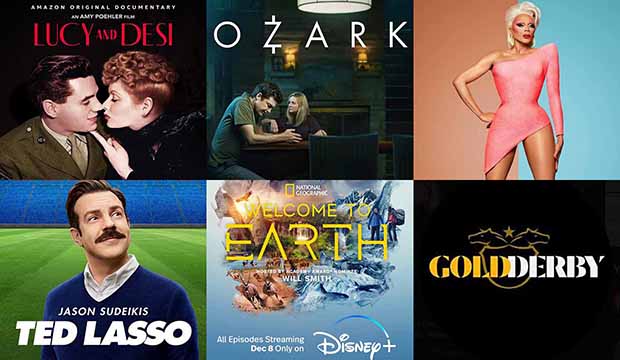 Five top TV editors will reveal secrets behind their projects when they join Gold Derby’s special “Meet the Experts” Q&A event with 2022 Emmy Awards contenders. They will participate in two video discussions to premiere on Thursday, May 26, at 4:00 p.m. PT; 6:00 p.m. ET. We’ll have a one-on-one with our senior editor Denton Davidson and a roundtable chat with all of the group together.

Synopsis: Explores the rise of comedian icon Lucille Ball, her relationship with Desi Arnaz, and how their groundbreaking sitcom “I Love Lucy” forever changed Hollywood.

Bio: Robert Martinez was an Emmy and American Cinema Editors nominee for “The Bee Gees: How Can You Mend a Broken Heart.” His career has also included “Mole Man,” “The Apollo” and “Pavarotti.”

Synopsis: A financial advisor drags his family from Chicago to the Missouri Ozarks, where he must launder money to appease a drug boss.

Bio: Cindy Mollo was a five-time Emmy nominee for “Dash and Lilly,” “Mad Men,” “Deadwood” and “Ozark.” She also received American Cinema Editors nominations for “Homicide: Life on the Street” and “Ozark.” Other projects have included “The Book of Eli,” “House of Cards” and “Juanita.”

Synopsis: In this Emmy Award-winning series hosted by RuPaul, America’s most sickening queens compete in fashion and performance challenges in hopes of snatching the crown as the next drag superstar.

Bio: Jamie Martin has won three Emmy Awards among five nominations for “RuPaul’s Drag Race.” Other projects have included “10 Things You Don’t Know About,” “Below Deck” and “The Real World.”

Bio: Melissa McCoy was an Emmy and American Cinema Editors nominee for “Ted Lasso.” Her career has also included “Beyond Limits,” “Rush Hour” and “Life Sentence.”

Synopsis: Will Smith travels to the extreme ends of the earth from active volcanoes to deep ocean adventures.

Bio: The career of Felix Black has included “The Beginning and the End of the Universe,” “Trailblazers,” “Nova,” “Volatile Earth,” “My Year with the Tribe” and “Britain’s Fat Fight.”