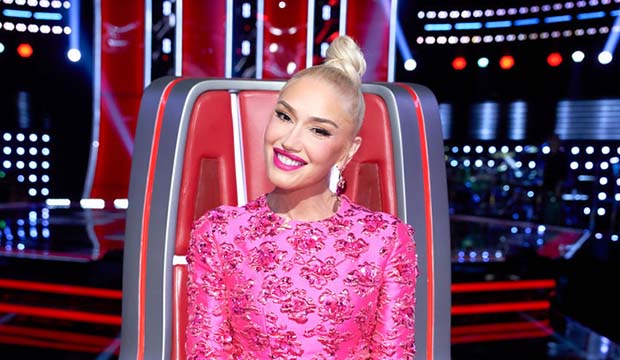 “The Voice” Season 22’s blind auditions continued on October 3 with Blake Shelton, Camila Cabello, Gwen Stefani and John Legend all continuing to build their teams. Over the course of the first four episodes, all but Blake utilized their blocks. Did the cowboy use that to his advantage tonight?

Below, read our minute-by-minute “The Voice” recap of Season 22, Episode 5 to find out what happened Monday, October 3 at 8:00 p.m. ET/PT. Then be sure to sound off in the comments section about your favorite artists on NBC’s long-running reality TV show, which coach you’re rooting for and who you think will ultimately join “The Voice” winners list for this 22nd season. Carson Daly hosts the Emmy-winning program. Here are the current team breakdowns:

8:00 p.m. – “Previously on ‘The Voice’!” In Episode 4, John won over the most sought after singer of the night — four-chair turn artist Parijita Bastola, a 17-year old from Maryland. Each of the coaches continued to grow their roster, but Team Camila is the closest to being complete with 10 members so far. What new talent will they discover tonight?

8:10 p.m. — Kique is an 18-year old Cuban from Miami who is excited that Camila is a coach this season. When he’s not singing, Kique is a reptile collector. His freshman year of high school he struggled with being bisexual in an all-boys catholic school. Once he joined jazz band his whole life changed for the better. Tonight Kique is singing “Beautiful Girls” and he instantly reminds Gwen of John’s singing voice. Blake is the first to turn his chair, followed by Gwen. It ends with a two-chair, husband-wife duel. Kique decides to join Team Gwen after she receives an endorsement from Camila.

8:20 p.m. — Hillary Torchiana is a 34-year old from West Chester, Pennsylvania. As much as she’s wanted to pursue music, she took the safe route career-wise. In 2015 a house fire cost her everything and overcoming the trauma took a few years. In 2019 she realized she needed to focus on what made her happy, so she’s back to singing! For her audition Hillary is singing “Easy On Me.” Blake hits his button, but won’t have to fight anyone for this artist. Camila is excited to see what song choices Hillary has planned in the future.

8:30 p.m. — Manu is an 18-year old who has been on two variations of “Voice Kids,” so she’s no stranger to this format. She sees those experiences as stepping stones that have led her here. Sadly, that’s not the case. Her performance of “Shallow” shows promise, but no coaches turn around. Blake thinks Manu sang “on a 10” from beginning to end. John agrees, saying the teenager has to put her own artistry into the song.

8:45 p.m. — The Marilynds is a duo from La Plata, Maryland made up of two sisters named Lindsay and Kasey. Both have been crowned Miss Maryland on the pageant circuit and they have been performing together their whole lives. Tonight they’re singing “What If I Never Get Over You.” John turns around first, followed by Camila. Blake and Gwen will sit this one out. The sisters admit they’ve dreamed of singing with John, but Camila doesn’t give up the fight, stating she’d love to work with the duo. Blake tries to push the Marilynds away from John and towards Camila, but not even the King of “The Voice” can change their minds. The Marilynds join Team Legend. In a less celebrated auditions, we see very brief clips of Team Legend acquiring R&B singer SOLsong and folk rocker Kara McKee.

9:00 p.m. — Zach Newbould is a 19-year old from Northborough, Massachusetts who grew up watching “The Voice.” He never thought he would actually get a chance to audition. Nobody else in Zach’s family is musically inclined so he would love some guidance. He begins to sing “Use Somebody” and I instantly feel goosebumps while simultaneously realizing this is a kid who could win. He’s got the voice, charisma and personality to go all the way. Gwen and Camila seem to simultaneously turn around first. Neither Blake nor John budge, which surprises me.  The women fight it out, but Zach ultimately chooses to join Team Camila!

9:10 p.m. — Lana Love is a 30-year old from Glendale, California who’s singing a haunting version of Mandy Moore’s “Candy” and I LOVE it. John is feeling it as well, turning his chair before Lana even hits the chorus. She hits some Mariah-esque whistles, yet somehow nobody else turns around! We learn Lana has a background in opera music, which explains a lot. This is quite a freebie for Team Legend.

9:20 p.m. — Daysia is a 17-year old from Leavenworth, Kansas. She and her twin sister were raised by a single mother who was hit by a car and killed in 2017, when Daysia and her sister were just 12. Daysia now sings at her uncle’s jazz club and receives his support. Tonight Daysia is singing “Crazy” by Patsy Cline and it’s a beautiful rendition. It appears like nobody is going to turn, but Blake does at the last second, quickly followed by Gwen. Blake tells Daysia she “looks like a star” and gives her his pitch. Gwen fights for the young singer as well and wins! Daysia joins Team Gwen and breaks Blake’s heart. “I just got the winner!” Gwen exclaimed.

9:30 p.m. — Conner Sweeny is a 23-year old from Nashville. He’s been playing music his whole life and in high school he started a band called The Barefoot Boys. Tonight he’s singing “Ain’t Worth the Whiskey” and hopes he can convince Blake to turn around. Sadly, Blake doesn’t turn around and neither does anyone else.

9:40 p.m. — Ansley Burns is a 15-year old from Easley, South Carolina. Her family has deep country roots and her great grandpa worked with Hank Williams, Sr. When Ansley was a little girl, Carrie Underwood even shared one of her singing videos, helping it go viral. Tonight Ansley is singing “Unchained Melody.” She definitely sounds young and hasn’t quite developed her lower register, but her high notes are incredible. After saying he wasn’t going to push his button anymore today, Blake turns his chair, followed by Gwen. Perhaps out of fear that Gwen would win another season with a child prodigy, Blake blocked his wife! Ansley is on Team Blake and the cowboy is absolutely thrilled.

9:50 p.m. — Manasseh Samone is a 22-year old from Dallas who works as a pre-school teacher. As a child she was insecure and did not have a father in her life. Singing was always Manasseh’s getaway and she sees this moment as the biggest opportunity in her life. She is singing “Rescue” and it’s clear this is a woman with a full, round voice that could fill a stadium. Still, something doesn’t sit right with the coaches and nobody turns around.

10:00 p.m. — bodie is a 29-year old from Ladera Ranch, California who is the son of two musical parents. He’s a father of three and also leads youth worship at a church. He lost his hair as a teenager and was diagnosed with alopecia. It started to grow back, but thin and white. He likes it that way! He met his wife in college and she’s his biggest supporter. Tonight bodie is singing “You Found Me” while playing guitar. Blake turns his chair first followed by John and the cowboy is HEATED! “Stop pushing your button when I push my button!” Blake screams at his nemesis. Gwen is the next coach to turn around and finally Camila joins the party. It’s a 4-chair turn! After a ferocious battle, bodie decides he will be joining Team Blake! After a rough day, bodie is Blake’s light at the end of the tunnel.