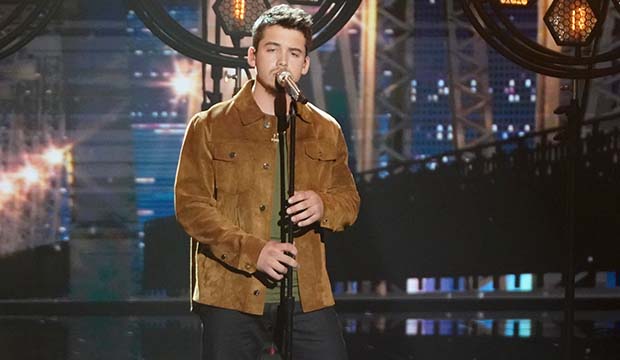 “American Idol” concluded with the 20th episode of Season 20 on Sunday, May 22. Noah Thompson took home the title, HunterGirl was the runner-up and Leah Marlene finished in third place. As always, judges Luke Bryan, Katy Perry and Lionel Richie provided commentary. The live finale also had many guest performances from superstars and previously eliminated contestants.

I was not a fan of any of the original songs tonight, but more on that later. Congratulations to all of the final three, who I am sure have bright futures ahead of them. I will say that my favorite performance of the night came from the entire top 10 joined by Flo Rida and the performance of “Smile” by Christian Guardino and Michael Bublé, which I need on my IPod now. So for the last time this season, hit your lights and let’s go!

Below is the “American Idol” season 20 episode 20 performances ranked: Who was best?

Round One: Bruce Springsteen

3. HunterGirl (“Dancing In the Dark” by Bruce Springsteen): Out of the three finalists, HunterGirl seemingly had the most fun with her Bruce Springsteen hit. She sounded and looked great simultaneously. This was the most relaxed performance we have seen from her in the competition. At the end of the night, it was not the most memorable performance from this first round. Also worth noting is that her outfit was very Carrie Underwood in her Las Vegas residency, so in a way we did get a little Carrie on Sunday. Social media was not as in love with this performance as her other two on Sunday.

2. Noah Thompson (“I’m On Fire” by Bruce Springsteen): Noah Thompson and Bruce Springsteen were not two names I would group together prior to Sunday. Then Noah opened his mouth and gave his best performance of the entire season with a song from the New Jersey icon. I had never heard it before. Yes, his “aw shucks” demeanor is slightly annoying to me, but I finally figured out who he reminded me of all season: Gavin Rossdale. Both have this unassuming demeanor that is so quiet that once they open their mouths, it’s like a light switch is flipped on. Social media adored this performance and even I want it on my IPod.

1. Leah Marlene (“Cover Me” by Bruce Springsteen): Out of the three finalists, Leah Marlene was the most adept at tacking a Bruce Springsteen hit. Starting off the night with an energetic performance coupled with a perfect song choice, Leah Marlene rocked the “American Idol” stage. The judges loved it and pointed out that it’s one of his less recognizable songs. Social media loved it equally as much, with some comparing her outfit to something out of “The Golden Girls,” which gave me a good laugh. On a night where she just came up a bit short, I have no doubt that Leah will be a superstar whose name will be on everyone’s playlist one day.

3. HunterGirl (“Red Bird” by HunterGirl): Out of the three finalists, HunterGirl had the most visual reaction upon her return. Cue the tears from me throughout the video. She looked and sounded great on this song, but once again it left me scratching my head thinking “That’s it?” Lyrically, it left a lot to be desired, but was not too saccharine at the same time. It just needed to be more memorable. Social media loved it though, so clearly the song has a fan base. In direct comparison to her fellow country finalist’s original song, it definitely had a more Miranda Lambert vibe to it, which was cool to see.

2. Leah Marlene (“Flowers” by Leah Marlene): I do not know who was cutting onions but they need to stop doing that during hometown returns. How she remained composed during all of that amazes me. I would be a bawling mess. The song itself was very nice. On the flip side, it was not exactly memorable either. Lyrically, it did not have a real impact on me whatsoever, but I loved the guitar work. Social media seemed to love it as did the judges, so all’s well that ends well I guess. Or so I thought. This song might be the reason why she placed third when all was said and done.

1. Noah Thompson (“One Day Tonight” by Noah Thompson): Noah unsurprisingly had the most simplistic original song, which after watching his return to Kentucky, made more sense. His hometown seems like something out of a Hallmark movie and I loved that. His reunion with his son was even more heartwarming. Again, a contestant that remained calm as a cucumber when any normal person would have been in tears ten minutes into the experience. Then they gave him a sign on the side of the road and finally broke him. With a song that already is a chart topper, Thompson gave a great vocal on a song that leaves a bit to be desired lyrically. I know that if this song becomes a huge hit there will be people who will comment and tell me how wrong I was, but let me circumvent that right now. I know there is a market for simple songs like this, just look at Thomas Rhett. I am not in that particular market, so odds are this song will not end up on my IPod, but it will end up on the playlists of millions worldwide. That is how strong the social media reaction was to that song.

2. HunterGirl (“Riot” by Rascal Flatts): I had totally forgotten that she sung this song at her audition, which would not have been my first choice for a song reprise from her. I was hoping for “I See the Light” from Disney week. She sounded great, better than the audition, but I still do not like this song for her voice. Saying that, social media loves her take on the song so keep doing your thing HunterGirl!

1. Noah Thompson (“Stay” by Rhianna): This was a brilliant performance and one that made me quickly realize that he was not playing for second place tonight. This was by far one of his best performances throughout this competition and made people notice him the first time around. This time, it solidified not only his place in the music world but also cemented his place as an “American Idol” legend. Naturally, social media went crazy over this performance and this was when I knew who the winner was.