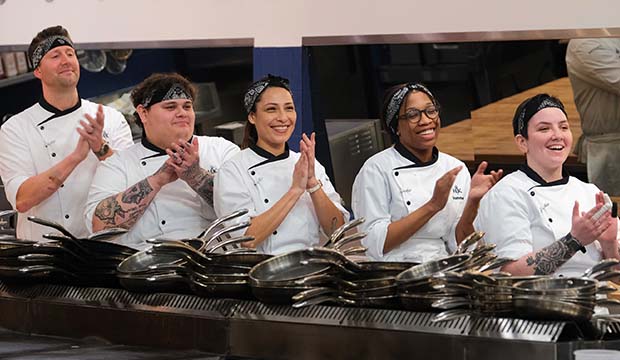 Your favorite foul-mouthed chef returns tonight in an all-new episode of “Hell’s Kitchen.” The black jacket final five are challenged to cook dishes with ingredients from different cities. James Beard Award winning Chef Michael Cimarusti joins Gordon Ramsay to judge the chefs dishes. And, for the first time, chefs will prepare for dinner service in one kitchen, and one will be eliminated in the “The Fab Five Take Flight” episode of “Hell’s Kitchen” airing Thursday, January 26 (8:00-9:02 PM ET/PT) on FOX.

“Hell’s Kitchen” is in its 21st season. For the first time ever, the well-seasoned 40-somethings take on the fresh up-and-coming 20-somethings in a battle of the ages. 18 all-new chef-testants entered the kitchen, with Christina Wilson and Jason “Jay” Santos returning as sous-chefs for the Red Team and Blue Team, respectively. At stake for the winner? A $250,000 cash prize and the head chef position at Gordon’s brand new Hell’s Kitchen Caesar’s Atlantic City. Who will take the title?

Below, read our minute-by-minute “Hell’s Kitchen: Battle of the Ages” recap of Season 21, Episode 13, titled “The Fab Five Take Flight” to find out what happened Thursday, January 26 at 8:00 p.m. ET/PT. Then be sure to sound off in the comments section about your favorite aspiring chefs on Fox’s reality TV show and who you think has what it takes to join the “HK” winners list. See which contestants are still competing below.

8:00 p.m. — “Previously on ‘Hell’s Kitchen’!” In Episode 12, The final seven contestants competed in several challenges to earn their coveted black jackets. Sommer and Dafne prevailed in round one, followed by Alejandro and Alex in round two. Cheyenne won the final spot in the top five, sending home Tara Ciannella and Sakari Smithwick in sixth and seventh place, respectively.

8:08 p.m. — The final five chefs gather in the kitchen for their next challenge. An Allegiant Airlines arrivals screen is displayed, and Gordon explains that a good chef should be able to create a delicious dish from anywhere in the world. There are eight possible flight numbers to choose from, and each will send a bag of mystery ingredients down a conveyer belt. Every contestant will choose one bag, but won’t know which ingredients are inside until after they open it. Here are the cities chosen: Key West, Florida (Sommer), Austin, Texas (Alejandro), Boston, Massachusetts (Dafne), New Orleans, Louisiana (Cheyenne) and San Francisco, California (Alex). Now that they know which cities their ingredients are coming from, it’s time to open them up! They have 45 minutes to cook. Let’s go!

8:25 p.m. — Sommer is thrilled with her ingredients because they’re right in the wheelhouse of her Jamaican roots. Alex is less comfortable with his (a live crab) because he doesn’t cook much San Francisco cuisine in his home state of Tennessee. Time quickly expires and Gordon brings in James Beard Award winning Chef Michael Cimarusti to help him judge the competition. Alex’s crab salad is “pretty good” and “refreshing,” putting him in the early lead by default. Next, Alejandro’s barbecued steak is “seasoned well” by the Johnny cake is “really heavy.” It’s solid, but not as good as Alex. Sommer’s mahi-mahi needs “more citrus,” but “screams Florda.” She overtakes Alex for the lead. Cheyenne’s jambalaya is “beautiful” and she “climbed a mountain in 45 minutes,” bumping Sommer from first place. Last up is Dafne, who serves corn chowder with beer-battered cod and green beans. It’s “delicious” and “cooked beautifully,” but it’s not a winning dish. Cheyenne has won the first black jacket challenge! For her prize, the young chef will go on an off-roading excursion. She asks Sommer join her for the reward. Alex, Alejandro and Dafne will stay back in the kitchen organizing and grinding peppercorns, as well as shelling pistachios.

8:35 p.m. — While on their off-roading reward, Sommer takes a sharp turn and crashes their vehicle, landing it upside down. Everyone’s okay! When they come back to tell the other chefs their story, an unconcerned Alejandro simply asks Sommer, “Is there a reason why you talk so loud?” There’s no love lost between these two. Hours later it’s time for dinner service, where the final five will cook in the same kitchen for the first time. Open Hell’s Kitchen! VIP guests include actress Tia Mowry. For some reason, Sommer and Alejandro are paired up on appetizers. Drama! But it’s Cheyenne’s lobster that is “ice cold and raw,” so they’re not off to a good start. Once they recover the black jackets move full steam ahead on appetizers.

8:45 p.m. — As dinner service continues, Gordon calls Cheyenne over and forces her to admit she forgot two scallops. Cheyenne blames Dafne for a lack of communication. Next Gordon calls a team meeting and tells everyone to “get it together.” With Cheyenne now staying afloat at the fish station, the fab five push out appetizers at a speedy pace, much to the delight of the patrons. They can now move on to entrees. Gordon is unhappy with Dafne’s “ice cold” mushrooms. He compliments Cheyenne’s “nicely cooked” halibut and Alex’s New York strips.

8:55 p.m. — A fire breaks out at Cheyenne’s station and Gordon tells her to “calm down” before she endangers everyone in the kitchen. She continues her downward spiral by throwing raw salmon up on the service table. Gordon calls another team meeting, calling the them “embarrassing.” With Alex’s support on the fish station, entrees begin to go out in a timely manner. It’s only a matter of time before Gordon has more complaints — slow garnish, imbalanced salmon and undercooked steak. Gordon kicks the entire Fab 5 out of the kitchen, telling him he’s never done that before to black jacket chefs. Banished to the dorms, they must come up with two nominees for elimination.

9:02 p.m. — Cheyenne and Dafne have been nominated for elimination. Cheyenne’s fish station was a disaster and Dafne lacks communication. Both plead their case to stay before Gordon decides to eliminate Cheyenne. He compliments how well she’s done for a 21-year old, but it’s not her time. In closing, Gordon states, “As the youngest chef in this competition, Cheyenne came a long way. Unfortunately for her, the ride ends a few stops short of Atlantic City.”