“Right now, I can’t really do anything about it because Broadway is closed,” laughs composer Ludwig Goransson about what he is doing to achieve EGOT status. In the last two years, Göransson has won an Emmy for “The Mandalorian,” Grammys for “This is America” and an Oscar for “Black Panther,” so he only needs a Tony to complete the feat, which has only been achieved by 16 people to date. He admits in his exclusive interview with Gold Derby (watch the video above), “I haven’t put that much thought into how to achieve the EGOT, but I love opera, I love Broadway, I love theaters and maybe someday, when I get the opportunity to work with someone I really love, that will happen, but not within the next couple years.”

Göransson currently contends with the Warner Bros. film “Tenet” for his second Oscar nomination; his musical compositions for the blockbuster have already received dozens of Best Original Score nominations this winter awards season. He highlights the tracks “Rainy Night in Tallinn” and “Posterity” as his favorites from the official soundtrack.

He explains about his first collaboration with its director, “Chris Nolan‘s very aware of the technology in cinema and if you think about the last 40 years, when you go to a theater and you sit down, there hasn’t been a lot of change in terms of what you’re watching. You’re watching a big screen, but every five/10 years, the sound gets better. There’s audio quality, the speakers, Dolby Atmos surround, so he’s very involved in the evolution of sound and that’s something that was very interesting from our early conversations was how we can experiment with different frequencies and really bring out everything — all the music to the maximum capacity of frequency sounds and higher and low sounds and give the audience an experience they’ve never had before.”

Göransson is credited as an executive music producer on two more Oscar-eligible titles: “Judas and the Black Messiah” and “Trolls World Tour.” He says about the former, “I kept in touch with everyone part of the project and gave notes or advice if I could or helped the process to be smoother, even though it was a smooth process. It’s a new role for me and I’m very proud.”

The Creative Arts Emmy Awards were presented virtually in September 2020, with nominees submitting prerecorded speeches to be played if they won. Best Series Music was the rare category that was presented without a speech; Göransson instead took to Twitter to offer acceptance. He reveals, “They didn’t actually ask us to submit a speech, which I would have if they asked me.” Göransson will contend to repeat at the Emmys for “The Mandalorian” in a few months and is leaning toward again submitting the season finale for consideration.

Jabez Olssen interview: ‘The Beatles: Get Back’ editor 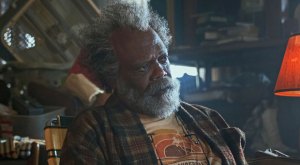