Costume designer Mary Zophres has received two Oscar nominations for her work on Joel and Ethan Coen‘s “True Grit” (2010) and Damien Chazelle’s “La La Land” (2016), and she’s back in contention this year for two distinct projects from the filmmakers.

Shortly after “La La Land”’s awards run, Chazelle recruited Zophres for his next project, his Neil Armstrong biopic “First Man.” “It was very much like ‘La La Land.’ It was just a different subject matter, but his approach is very much the same. He knows exactly what the film is going to look like,” Zophres said at Gold Derby’s Meet the Experts: Costume Designers panel, moderated by this author (watch the exclusive video above). “He’s very much a collaborator and is very open to ideas and to meetings and discussions and meetings and show and tells. He’ll be there whenever you need him to be there.”

While “La La Land” was awash in bright, bold colors, the wardrobe in “First Man” was the complete opposite. There was still color, but in far more muted tones, fitting with Armstrong’s restrained personality and the underlying grief in the story. “My pitch to Damien was to use a lot of natural fibers — cottons and wools — and to be able to pull back some of the color so it would have the effect of a Kodachrome photograph,” Zophres said. “That’s how we wanted it to look. And I knew we were going to shoot on 16 mm. Some of it’s 16, some of it’s 35 and some of it’s IMAX. You don’t know what it’s going to look like. That was a little intense and intimidating, but in the end, it really makes the movie make a lot of sense story-wise to me.”

The most complicated outfits in the film were the NASA spacesuits. Zophres and her team had the full cooperation with NASA to recreate the Apollo 11 suits, but the massive undertaking was “horrible.” “It was really hard, but we did it,” she said. “It was just a really painstaking process. That was about finding something that historically existed and trying to recreate it and trying to be as authentic as possible. … It’s very nerve-wracking.”

Zophres, who has worked with the Coen brothers since “Fargo” (1996), had to do historical research as well for the Coens’ Western anthology film “The Ballad of Buster Scruggs.” She relied less on photographs — since those were rare back then — and more on diaries and books. And every now and then, she had to think outside of the box.

“Meal Ticket,” the third of six chapters in the film, features Harry Melling as Harrison, a performer with no arms or legs. “I thought it was going to be CGI, but it was actually left to the costume department to figure out,”  Zophres revealed. “That was really stressful. We built shirts with four arms, so that when he was shot in the front, he could put his arms through the back arms and then the front arms. And then we dropped the shoulder a little bit to cheat. But the four-arm idea, that was probably the best idea I had all year.”

In the same chapter, Liam Neeson dons a humongous bear skin coat that, like Jon Snow’s capes on “Game of Thrones,” was made out of Ikea rugs. Zophres discovered the Swedish conglomerate’s rugs because they were the only things that would dye the same color.

“I didn’t know about ‘Game of Thrones’ until after,” she said. “We dyed them first. That was the only thing we could get that would consistently dye the same color. If you look inside the coat, there’s like 30 pelts and they’re all sewn together by hand and it looks really great. It kind of looks like he did it himself. But we clipped it and shaved it. My amazing ager and distressing artist Rob Phillips did most of it and he clipped into it and airbrushed it with paint and then he would shave into the worn areas. And the final coup de grace was hair products, like gel just to get it gunky and gross.” 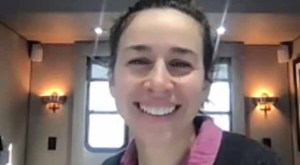