Mj Rodriguez was given all kinds of juicy material in Season 2 of FX’s “Pose,” in which she plays Blanca, mother of the House of Evangelista. Early into last summer’s episodes, Blanca learns she has AIDS but she never stops fighting. We see her stand up for her rights, join ACT UP, open up a nail salon, find love and absolutely nail a lipsync of Whitney Houston‘s version of the National Anthem. “It was a lot to really delve into and I loved it,” says Rodriguez in an exclusive new interview for Gold Derby. “I loved that she was finally finding a space for herself.” Watch the full video interview above.

Even as Blanca struggles through the complications of AIDS, she is able to find resilience from within. As Rodriguez describes, the unknown element of when the virus might “take her out” just gives Blanca that much more urgency to fight. “She had to really stand up for what’s right,” Rodriguez observes. “If she passed away, she would know that justice would be served and that her legacy would probably stand true.” The actress brought together various experiences of the people around her who had gone through the AIDS epidemic in the late ’80s and early ’90s. “I basically put my soul on the screen,” she adds.

One of Blanca’s best qualities is her ability as a mother to the children she’s taken in. Her tough but fair style has allowed her children like Damon (Ryan Jamaal Swain) and Angel (Indya Moore) to thrive in the careers they’ve chosen for themselves. “The most important thing that I felt any mother on this earth would do with their baby is to show them love and nurturing and let them venture the way they need to venture,” Rodriguez states.

Of course, as her children “bump their heads” along the way, she is there for them but will also warn them of the consequences. Another fascinating element of Blanca to explore in Season 2 was her love life, as seen in the Episode 9 beach episode. “I felt the world needed to see how a melanin woman can be loved,” she explains. “A melanin trans woman can be loved and the men that see her completely see her. There aren’t always fetishes out there. There are men who truly adore the woman they see in front of their space no matter their journey or no matter their walk of life.”

Reflecting on how far she’s come from the start of Season 1 to now preparing to film Season 3, Rodriguez feels that Blanca Rodriguez-Evangelista has become “a part of me too,” adding, “I will take with me every single character that I decide to portray. I will take a piece of me and put it into that character.” 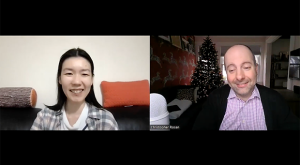 Seth Reiss and Will Tracy interview: ‘The Menu’ writers