“Everyone’s hiding some sort of version of themselves,” explains Sarah Snook about playing Shiv Roy, the daughter of a powerful filthy rich media magnate on HBO’s epic drama “Succession.” “Shiv definitely falls into the category of a strong female character, but the more interesting thing is having complex female characters, and I think she definitely is one. She’s got a lot of monsters or demons that she’s dealing with,” the actress explains, “but she’s quite good at disguising them.” Watch our exclusive video interview with Snook above.

The Aussie actress has garnered emphatic praise from fans and critics for her nuanced portrayal of the enigmatic one-percenter. She’s ambitious, ruthless and confident, yet underneath her glossy exterior are glimpses of her vulnerability as she navigates the often suffocating dynastic politics of her powerful media family and in particular the complicated relationships with her iron-fisted father (Brian Cox), husband Tom (Matthew Macfadyen) and brothers Kendall (Jeremy Strong), Roman (Kieran Culkin) and Connor (Alan Ruck).

At a recent panel discussion for the show, Snook recalls a comment made by co-star Culkin that struck a chord with her. “He said ‘we’re all f***** up, but you’re probably the most f***** up, but you’re just better at hiding it,'” she laughs. “I think that’s becoming more and more true for Shiv … I love playing that. Everyone’s hiding some sort of version of themselves.”

The actress explains that there is a degree of spontaneity to how she approaches each episode because she does not know what is coming up for her until the eleventh hour. “What I really like about doing TV,” she explains, “is I haven’t known what’s going to happen in the next couple of episodes prior to shooting them. What I really love about that is you have to invest in and live in the present moment and just accept things for the facts that they are.”

This was most apparent before the shocking season finale, which ended with an explosive family betrayal as Kendall lashes out at his controlling father by implicating him publicly in the sexual harassment scandal engulfing his media empire. It was a clever and unexpected twist that left fans gasping for breath, eagerly anticipating what will follow next season. For Snook, she did not see it coming at all. “I finished reading that [script] maybe 25 minutes before we did the table read because we only just received it that morning,” she explains. “I had my hands over my mouth by myself in my trailer going ‘I can’t believe he’s done that! … then thought that it made so much sense and then was like ‘yes! Of course!’”

“Succession” has already earned Emmy, Critics’ Choice and Television Critics Association nominations for Best Drama Series, plus AFI, DGA and BAFTA honors. Critics love it, propelling it to a MetaCritic rating of 88 based on 16 reviews (all of which are positive) and the show attracts its fair share of attention on social media as fans dissect every witty insult and key power move. When asked why people seem to have really taken to a show about generally unlikeable, filthy rich people, Snook says it is because we ultimately love to see these people make fools of themselves. “We see people holding those traditional markers of success being such idiots and buffoons and unlikeable,” she laughs. “There’s something delicious about that, where you go, ‘ha, see, you’re not a perfect person’!”

Oscar Experts slugfest: Will Smith’s return and lots of thoughts on ‘The Fabelmans’ 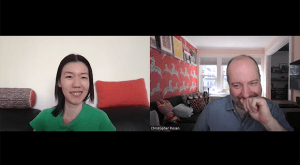